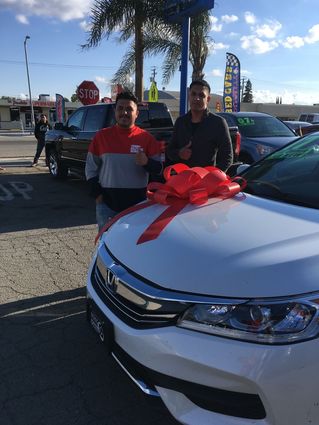 Jose Aspericueta Silverio wants you to come into one of his two used car lots and leave with a shiny, highly polished and mechanically sound vehicle.

He's had the Wasco lot for eight years and the one in Delano for four, and he's got a wide variety of cars to meet every budget.

In order to qualify for a vehicle, Silverio says, "No credit is OK. We even have options for people with bad credit."

"My greatest joy is being able to help someone who comes in afraid they won't qualify for a car," Silverio said. "I feel so happy when I can do this for the customer."

One special thing he is able to offer are low-priced cars. Silverio has about 130 cars to choose from between the two lots, and each one has been checked out by his mechanic before it is driven off the lot.

He purchases his vehicles from Bakersfield, Los Angeles and San Francisco.

"My reputation is important to me," Silverio said. "If you leave the lot and then have a problem, I don't want that. I would rather you leave and not have any problems at all."

But he is realistic; cars have problems, but when they do, you need a good mechanic who will be truthful with you about what is wrong with your car.

Silverio brought up those "forever cars," like Toyotas. "People will come in and look for a new car because they are tired of the color or they want a different model," he said. "Even though their car might be in great shape, they are just tired of it."

Prior to owning his two car lots, Silverio worked in the oil fields; however, he found himself buying and selling cars on his days off. He's always been interested in cars.

He is excited about remodeling his Wasco lot. He wants it to look sharp with new paint and a new office. He loves having his lot filled with cars because it gives customers more to choose from.

"My internet business does very well," he said. "In fact, that is where most of my business comes from."

Silverio shared how he got the name for his lots. He met a man in Los Angeles who owned a car lot called Family Auto. "He impressed me so much with his knowledge and work ethic, when I opened my lot, I asked him if I could use his lot's name and he said yes."