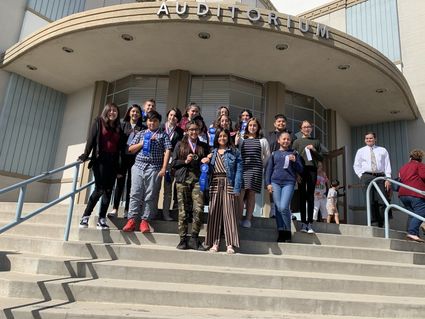 The Wasco Union Elementary School District had its best showing ever at the Kern County History Day competition in Bakersfield Saturday.

This year's theme was Breaking Barriers in History. Five students comprising different grades and school sites took home Champion blue ribbons and medals and will be competing at the state level. That competition will be held May 8-10 at William Jessup University in Rocklin.

"We went all out on our poster boards," Advisor Laurie Rodriguez said. "We had a large-size board in order to display more information."

Ward not only broke racial barriers but also gender barriers. She was a 17-year-old mixed-blood Native American Cherokee woman who lived during the 18th century and used her wounded husband's gun to lead her tribe to victory when they were involved in a battle with American troops and white settlers.

Another Champion for the WUESD was Palm Avenue eighth grader Camila Almanza, who wrote about baseball player Jim Abbott.

Abbott, born without a right hand, went on to become a professional baseball player. He played for the California Angels, New York Yankees, Chicago White Sox and Milwaukee Brewers from 1989 to 1999.

"When I saw the option of doing my project on Jim Abbott, I knew that this option was perfect," Camila Almanza said. "My teacher [Mrs. Rodriguez] and I got the opportunity to email him and ask him how he got his number."

Abbott answered Camila Almanza by telling her that one of the Angels team officials chose the number for him.

"Jim Abbott relates to the National History Day theme: Breaking Barriers because even though he had a disability, that didn't stop him from achieving his dream of playing in the majors," Camila Almanza said. "Having a disability only made him work harder and that made him a stronger person."

Another Champion individual exhibit in the junior division from was "Max Fleischer: Breaking Barriers in Animation" by TJ's Alex Mendoza and Steven Curbelo.

Their display had an abundance of cartoon characters' pictures that Fleischer created, such Popeye and Betty Boop.

Fleischer broke the barrier of animation by making the first animation with sound, inventing the rotoscope -- a technique that animators use to trace over motion picture footage, frame by frame, to produce realistic action. This technique helped animation grow.

"Every time we researched deeper into the life of Max Fleischer, we learned new things," Alex and Steven said.

"We were able to conduct an interview by email with two of Max Fleischer's granddaughters and a great-granddaughter," the two students said. "They provided us with some very detailed information."

Another Champion was Madeline Licea, also from TJ, who presented a paper on El Chavo del Ocho ("How Roberto Gomez Bolanos Broke Barriers in Comedy).

Bolanos was a Mexican screenwriter, comedian, actor, songwriter and director.

He presented messages about social values by using comedy through his character El Chavo del Ocho.

Additionally, he broke a barrier with the creation of his hero character El Chapulin Colorado, Madeline said.

His show became a cultural phenomenon, and many generations of comedians across Latin America consider him the king of the region.

Another Champion from Palm Avenue School in the junior division was the group exhibit about a noted Mexican-American doctor.

"We wanted to do research on Dr. Hector P. Garcia because we wanted to learn more about our Mexican heritage," group members Devanie Caban, Addison Fore and Leah Mealy said.

Garcia was the doctor was the first Mexican-American doctor to participate in World War II. He broke barriers based on race and ethnicity. He also initiated the Civil Rights movement for Mexican-American servicemen. "This was called the GI Forum," the group presented. "He believed everybody should be treated equally regardless of their skin color, race or culture." 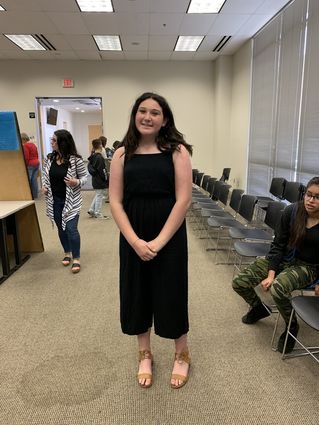 From Palm Avenue, another Champion was Gwyneth Kelly, who presented a historical paper on Francisco Jimenez, a Mexican-American writer who is a professor at Santa Clara University.

Jimenez was born in Mexico, and when he was young, he worked in the fields with his family.

When he was in eighth grade, his family was deported to Mexico. He returned to the United States and attended Columbia University. From not being able to speak English, he is now a professor at Columbia University in the Department of Modern Languages. His works include "Stories from the Life of a Migrant Child" in 1997.

At the conclusion of the competition, each student expressed gratitude for their instructors' help and displayed affection for their advisor == and they reciprocated.