Next up: construction, operations bids 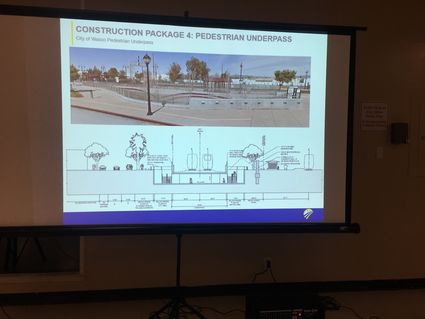 Design of the planned pedestrian underpass in Wasco, show2n at open house Tuesday.

High Speed Rail conducted an open house to update the public on current progress of the project's construction through the Central Valley on Tuesday at the Wasco Community Center.

Toni Tinoco, information officer for High Speed Rail, said the 2020 Business Plan was released in mid–February and is available for public review on the HSR website, hsr.ca.gov. There is a 60-day opportunity for public review, and comments can be made on-line.

It is anticipated that electric-powered trains will be running between Bakersfield and Merced by 2030. As of the most recent forecast, the cost is estimated to be $20.6 billion to $23.4 billion and that funding is available through the state bond, a federal grant and the Cap and Trade Program.

By 2022, construction of right of way along the 119-mile section between Madera and Wasco should be completed, Tonico said, and the entire right of way from

San Francisco to Los Angeles should have environmental clearance. She said there are currently about 700 onsite construction workers on the project.

A request for proposal for track and systems was put out Feb. 19, and bids are due June 30. There are three qualified contractors who will be presenting their proposals. Acquisition of rolling stock and the selection of a private operator are described in the plan. Extension of HSR to Los Angeles and to the Bay Area will be built as funding becomes available.

Antonio Canete represented California Railroad Builders, the contractor for Construction Package 4, which is a 21-mile segment running from Poplar Avenue, north of Shafter, to Garces Highway. That project involves 12 structures, 88 utility relocates, 2 railroad shooflies (temporary detours) and four at-grade closures. He said that 85% of the right of way is currently under construction.

Photos were shown of the current construction at the crossings of Garces Highway, Pond Avenue, Poso Creek, McCombs Avenue, Merced Avenue, and the Wasco Viaduct. The huge earthen berm being built between the high-speed rail alignment and the BNSF Railway was described as an "intrusion protection barrier" to protect both railroads. When completed, the High Speed Rail will be protected by an 8-foot-high fence on both sides.

High Speed Rail, the City of Wasco and Amtrak have been working on a concept to provide for Amtrak passengers. The current Amtrak station building will be demolished, as the High Speed Rail alignment goes right through it. However, the current Amtrak boarding platform and shelter will remain. Access will be made available by a tunnel under High Speed Rail. The tunnel will be accessed on both sides by stairs and ramps. Parking will be made available along G Street. The responsibility of maintenance and security will be part of an expected agreement between HSR, the City of Wasco, and Amtrak.

Construction will start within the next month or two on the temporary shooflies that will reroute BNSF to the west at Poso Street and Highway 46 to allow construction of the underpasses at these locations. Both underpasses will accommodate four lanes of highway traffic.

The current 7th Street crossing will be closed, Tinoco said.

Regarding construction from Poplar Avenue south to Bakersfield, the right of way is all approved, and it is expected that HSR will begin property acquisition this year.