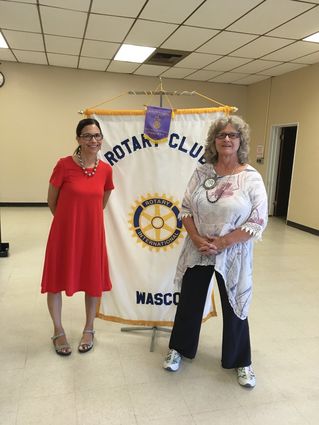 Scarlett Sabin and Carol Hamilton of the Bakersfield Ronald McDonald House, presented an updated slide show of the newly renovated house to the Rotary Club on Monday.

"There were 500 people at the grand re-opening," Sabin said.

The assistant superintendent of the Wasco Union Elementary School District, Brad Maberry sits on the Ronald McDonald board of directors.

Director Scarlett Sabin, along with her coworker Carol Hamilton, presented a slide show of the construction and completion of the house, which is located at 420 34th St. in Bakersfield.

Sabin said there is currently a waiting list for use of the House. She added that there is a washer and a dryer available and two showers for two families.

"There are no televisions," Sabin said. "That is so guests will interact with each other."

The Wasco Rotary donates to the Ronald McDonald House on a regular basis.

In order to be able to use the facility, you must live 25 miles from the Bakersfield Ronald McDonald House and according to Maberry, there have been several Wasco families that have used the facilities.

Maberry started the "Runnin for Ronald," which has proven to be successful. In fact, a Rotary Club in Ventura has approached him and is interested in sponsoring a similar fundraiser in their town.