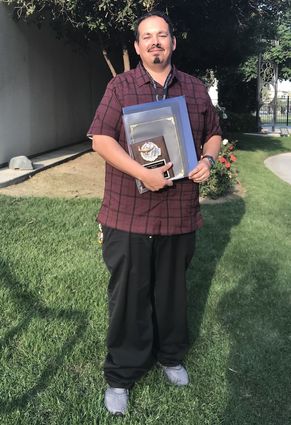 Wasco Union Elementary School District took some time out on Thursday to celebrate and recognize its staff.

This year, the district honored distinguished alumna and former band teacher Miriam Grisso at the ceremonies.

Grisso, a native of Wasco, taught band for fourth through eighth grades for 26 years at the WUESD. She received her bachelor's and master's degrees in music from the University of Southern California. She was also a flutist for the Long Beach Symphony, Westchester/Marina del Rey Symphony, Palomar Symphony and the Misica da Camera Symphony.

"Miriam Grisso's bands won a multitude of awards," Richers said. "The Thomas Jefferson band became one of the premier award-winning bands of the county through her efforts."

She was one of the first women in the Trojan Marching Band in 1971, and is a USC football fan.

Grisso also drove her Model A in the Wasco Rose Festival Parade for years.

"It is hard because some of the work is very repetitive; its's hard sometimes when you feel things are not what you expected," Richers said to the assembled group. "More important than any other aspect of the work you do is you deal with peoples' lives and guide them."

Richers said James Forrest Elementary School and the new gymnasium at Palm Avenue will both be ready for the opening of school.

"The maintenance operations and transportation building will be completed by Christmas next year," Richers added. "Tours of both sites will be made available before they open this year."

Richers also mentioned that all the schools will be fully solar powered as well this year.

Richers then called the school principals to the podium to introduce their candidates for classified employee of the year and teacher of the year.

The principals presented each employee with a special plaque.

In response, Teacher of the Year Vagle said, "I look forward to coming to work every day."

"She is a model teacher," Hughes said of Lockard.

"Cheryl is passionate and an advocate for her students," Pollard said. "Noemi is always smiling and brings brightness to the classroom."

"I've worked with Marcus within the community," Goodwill said. "It's truly an honor to present him with this award. He goes above and beyond."

"She brings a lot of experience in her job," Arellano said about Simmons. "She shares interesting skills with her classrooms."

Rene De Leon, an 8th grade history teacher, has worked in numerous capacities over the past 13 years for several different areas in the district such as summer school teacher, extended day teacher, long-term English learner

He also works with the district's Long-Term English Learners and meets one-on-one with each EL student to review their academic progress/status. He then develops and sets goals with each individual student.

"De Leon makes home visits to conference with parents on their student's academic progress/status," Richers said. "He establishes and maintains a positive rapport with staff, parents and students."

De Leon is successful and motivational in reaching those students who are difficult to reach/motivate.

"Day in and day out, he goes the extra mile to provide his classroom with a sense of community by building trust and spreading enthusiasm and humor." Richers added.

Additionally, Richers announced that Lorena Cozad reached 50 years of service in the district. 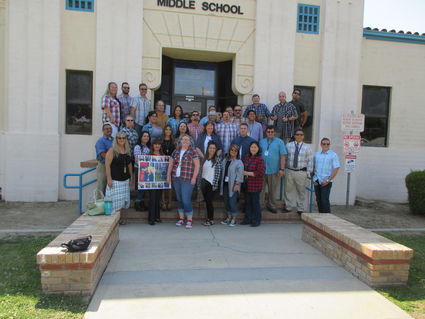 Thomas Jefferson faculty in front of the school.