To TJ, goodbye for now 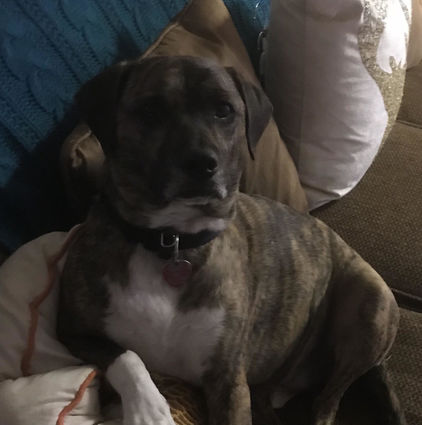 TJ was a member of the family.

I have had a really bad holiday season this year, one of the worst in a very long time. We had to put our dog down the day after Christmas. TJ was more than just a pet, but was a true member of our family, and I miss him so much already.

I remember first seeing TJ at the Wasco Animal Shelter, shy and timid, not jumping up and down like a lot of the dogs who were fighting for attention, looking for that new home. He just looked at me with those big brown eyes, a little frightened and shaking a little bit. He was really quiet until we got out to the play yard. Once there, he perked up and by the time we left that play yard, he was ours.

It didn't take long for TJ to become a member of our family. He started out being an outside dog, but before too long, he had made it into the house, our hearts and our beds at nighttime. I remember our walks every day, sometimes two or three in a day, depending on my schedule. I remember him as I got off work and headed home. He would be there scratching on the door, waiting for me to open it. He would than race to one of his toys and head to the back door, waiting for a little play session. He would then give me that look when we got back inside and that tail would curl up and twitch, his signal that he was ready for another walk.

Some people say that you really can't compare the loss of a dog to a human part of the family. I agree that it is a different loss, but it still doesn't ease the pain of it. The bond we had was a special one and his love was an unconditional one. It was a love that was free of any baggage or conditions that a lot of love in this world comes with. It is a different kind of loss, but it still hurts you down to your soul.

I actually had to rewrite this editorial. I was halfway through the first attempt. Tears were flowing, and they were bitter, angry tears, wondering why this had happened, and also full of guilt. At the hospital they gave me a choice of taking him home, having to help him go to the bathroom for the rest of his life, him unable to do it on his own. They also said that he would never be able to walk again.

For just a second, I thought that just having him home, it would be better than letting him go. Having him there to hold and love would be better than not having him there at all. My wife helped me realize that this wouldn't be something that TJ would want. It was selfish of me, but I just couldn't let go of him. I finally signed the paper, and my son and I were able to say goodbye to him before they released him from this world.

Midway through writing the original version of this piece, through bitter tears, I was shocked by an intense feeling that totally changed my mindset. Instead of just bitter tears, there was a sense of peace and comfort that I really needed. Instead of remembering the final moments I had with him as an act of betrayal, I allowed myself to see the look of love in those big brown eyes.

I brought my face to his, and he gave me a bunch of kisses on my nose. I then allowed myself to feel the love in those kisses instead of the sense of impending loss. There are still days where I just start crying.

When we are shopping, I automatically head toward the pet toy section, then realize what I am doing. Also, when I think of taking a power nap, I expect to see him trotting down the hall ready to curl up on my feet or beside me on the pillow.

I know that there is a heaven, and I believe that TJ is with his namesake, my father-in-law right now. I know that there will be plenty more tears to come. But, I promise you TJ that mixed in with the tears of sadness and loss, there will also be tears of comfort and joy, knowing that you are happy and that we will have an amazing reunion someday. Thank you for being such an amazing companion and one of the best friends I have ever had. Until we see each other again, I love you so much my little baby boy.