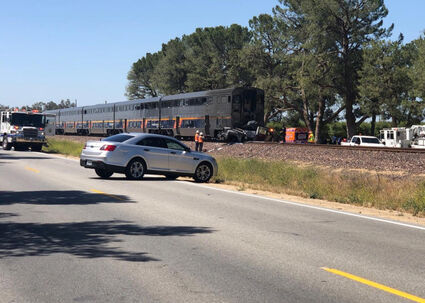 The pickup was wedged under the train.

A pickup truck was dragged nearly a half-mile to the Shafter Cemetery by an Amtrak train Friday evening, killing the driver and injuring three train passengers.

Upon arrival, Shafter police officer officers discovered a pickup truck wedged underneath a southbound Amtrak train near the cemetery.

Passengers on the Amtrak train waited at the cemetery before buses came to pick them up to continue their trip.

It is believed that the collision took place near Cherry Avenue and Highway 43, and the vehicle was dragged nearly a half-mile to the cemetery site. Passengers were safely evacuated from the train and waited at the cemetery before buses arrived to continue their trip to their destination. the train terminates in Bakersfield.

The driver of the pickup truck was declared dead at the scene. Three of the passengers were treated for minor injuries, California Highway Patrol officials said..

It is reported that an off-duty Shafter police officer was one of the first persons on the scene and attempted to administer aid, but the area was too hot and he could not get near the auto.

Highway 43 was closed for several hours while the scene was cleared and an investigation begun. It is unclear the cause of the accident. The deceased driver of the pickup hwas unidentified Wednesday night.

The investigation by the California Highway Patrol is ongoing.