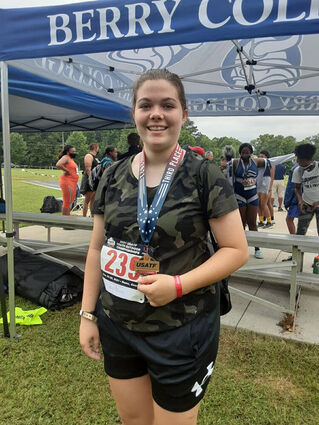 Joslyn Pierucci won a third place medal at the meet.

Joslyn Pierucci, 13, of Shafter, has won third place at a national track and field competition.

Daughter of Shafter High football coach Jerald Pierucci and Jodie Pierucci, Joslyn was competing at the bottom of the age group which means she was competing against mostly girls older than her.

There were over 1,000 athletes competing at the event, with competitors ranging in age from 8 years old to 18. Joslyn competed against 10 other girls in her age division from all over the country including athletes from Arizona, Pennsylvania and Florida. This was one of the largest competitions of the track and field season, with a number of nationally-ranked athletes competing.

Joslyn had three throws in the first round to make it to the next round. She advanced into the top eight, qualifying her to the finals. Joslyn threw her personal record to grab the third place medal.

This was her largest competition she has been to.

"It was kind of nerve wracking, competing in such a big competition, but once I started throwing, I settled down and it was great," Joslyn said.

She is going into the eighth grade at Rio Bravo Greely and is coached by Dawn Godbehere, who was a highly ranked thrower nationally.

Joslyn said that she plans to keep throwing into high school and she is looking forward to her next competition, which is still to be determined.