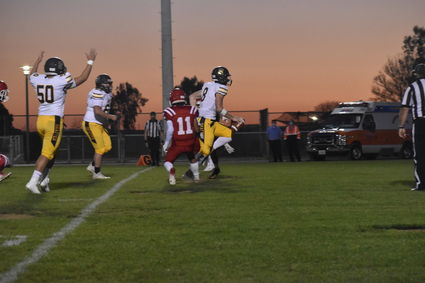 Tyson Dozier scores the first touchdown of the season for the Generals.

The Shafter High Generals took to the football field for the first time since the pandemic began, winning 52-3 against the Arvin Bears.

The Generals began the game strong, scoring three times in the first five minutes of the game.

With no kick-offs, the Bears took possession to open the game at their 20 yard line. The Generals' defense gave the offense a chance on the first play of the game as they recovered a Bears fumble, giving the offense the ball deep in Bears' territory.

The Generals' offense, led by quarterback Tyson Dozier, wasted no time in scoring, with Dozier scoring on a keeper with just a few ticks off of the game clock, putting Shafter up 7-0.

The Generals have benefited from a couple of transfers this year, with two players from other SSL teams joining the Generals' squad.

The Shafter defense continued to stifle the Bears' offense, allowing the Shafter offense get the ball back.

Another transfer to the Generals, Walker Maino, then ran over three Bears' defenders on a big run that gave the Generals a first down deep on the Bears' end of the field.

Dozier ended the drive with another score as he took the ball in from 25 yards out. 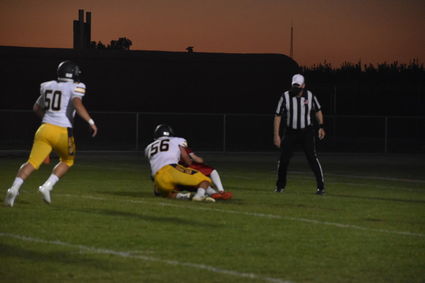 Colby Miller puts the Generals up 9-0 with a safety.

The Generals ended the first half with a 23-3 lead, with the Bears managing a field goal late in the second quarter.

Shafter opened up the third quarter just as they started the game, with a big score, this one a 32 yard run from Dozier.

The Shafter defense got in on the scoring as well, with Anthony Hoxie grabbing a deflected pass out of the air and taking it the other way for a 67 yard touchdown,

Dozier ended the game with four touchdown passes, three of those to Huerta, who wound up with three touchdowns and 181 receiving yards.

The Generals will play their only "home game," when they host the Kern Valley Broncos on Thursday night at 7:30 p.m. With Shafter's stadium under renovation, the game will be played at Frontier High School. This will also be Senior Night for the Generals.