Election results too early to call 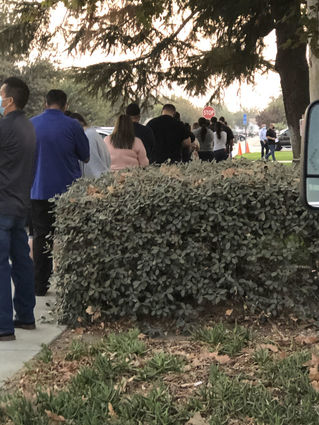 The line was long and steady at the Shafter Veterans Hall on Election Day.

In an election with the majority of the races too close to call after election night, TJ Cox took center stage as he is trouncing David Valadao in Valadao's comeback bid for the 21st Congressional Districts seat.

Cox had dethroned Valadao for the seat two years ago in what was considered an upset win for the Democrats.

Valadao announced that he would run to regain the seat in the 2020 election. Both candidates flooded the airwaves with negative ads against the other, questioning the other's honesty and integrity. As of press time, the district has spoken in favor of Cox, as he is leading Valadao with 61% of the vote, compared to Valadao's 38%.

In the race for the 23rd District seat, incumbent Kevin McCarthy appears to be winning with a 17% lead over Kim Mangone.

For the 32nd Assembly District, Rudy Salas is leading with 72% of the vote over opponent Todd Cotta.

In local races, it is much too close to call in the Shafter City Council race. Just four percentage points separate the top four candidates in the contest. There are three seats up for grabs, with all of the candidates within 10 percentage points of each other. Newcomer Pete Espinoza leads all candidates at press time, with 20% of the vote. Current council member Chad Givens has the second most votes so far with 989 votes, or 18.5%. The third spot at the moment belongs to Kris Lawrence, with 18% of the vote. Current Mayor Gilbert Alvarado trails Lawrence by about 40 votes. Council member Manuel Garcia is in fourth, with 14.8% of the vote, with Rafael Zamudio rounding out the candidates at 10.7%. Look for updates on the Shafter Press newspaper online, which will be updated daily with any new results.

In the Richland School District Board race, in Trustee Area 3, Deanna Rodriguez-Root has a 9% lead over Julian Armando Calvillo, grabbing 54 percent of the vote.

In Wasco, where their City Council seats are elected by districts, instead of at-large, there are two races with more than one candidate. In District 2, William David Ward has a lead over Vincent Martinez as of press time, with 33.7% to 32.2%. They are distancing themselves from the other two candidates, Florirene Olvera and John Kim, who have 19% and 14% respectively.

In the District 4 race, Tilo Cortez is leading opponent Eddie Saldana with 52%.

In the Wasco Union High School Board race, with two spots open, John Steward and Sharon Nicol occupy the top two spots at this time, with 43% and 35% of the votes respectively. Joel Ackerknecht is trailing with 21%.

In the Maple School Board election, Randy Bloemhof has 78% compared to Ty Rogers.

Wasco had a bond measure on the ballot, with Measure H being contested. The measure would authorize the Wasco Union School District to issue up to $16 million in bonds with bond revenue going to fund improvements to schools, health, safety, restrooms and facilities, and construction of a master kitchen and would require an estimated property tax levy of $30 per $100,000 in assessed value. The measure is going down at this time, with over 51% of the people voting No on the measure.

Results will be updated daily as counting is completed and verified.