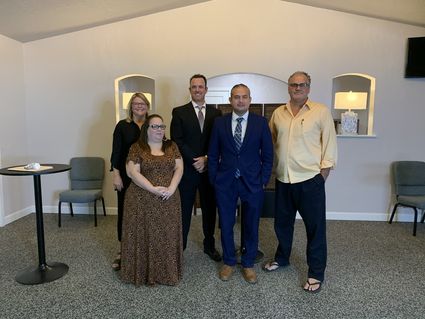 The three candidates for the WUHSD board, Joel Ackerknecht, Sharon Nicol and John Steward introduced themselves to attendees at the virtual candidates' forum on Monday, Oct. 19 held at Peters Funeral Home courtesy of a collaboration between Sharon Sharp from Wasco Is and Vince Martinez from North Kern News.

Both Martinez and Sharp moderated the forum.

Martinez and Sharp asked the same questions to each candidate. The first question concerned the fact that since the district does not have a Human Resource manager, how does the board of trustees ensure that the most-qualified candidates are being hired?

Ackerknecht and Nicol both stated that even though the district does not have anyone with the title of HR manager, the staff has a great system for choosing.

While Ackerknecht acknowledged that the district will often ask the board members to interview candidates, the decision is made by the administrative staff at the district.

The next question asked each candidate how they would fill open positions and whether promoting from within is a priority. Does the district provide a career path whereby employees can be promoted?

Ackerknecht said that he was happy with the team the district has in place and the team uses pathways to promote to higher positions.

"Mr. [Rob] Cobb is an example of that," he said. "Mr. Cobb worked for the district for 25 years and is now the new superintendent."

Steward commented that Principal Kevin Tallon is a good example of hiring from within.

Nicol said that she compares hiring from within as corporate development in order for employees to reach their goal of a higher position.

Each candidate was also asked about the Reform Wasco High campaign on student physical and emotional safety and allegations of discrimination. What would the board members say to parents who express concern about repeated accusations? How would you react and what would you say to the student?

Both Ackerknecht and Nicol said that the district closely investigates every accusation from all sides. Steward said that he scrolled through Facebook because he was unaware of the issue. He isn't sure how the students reacted to the resolution whether they thought it wasn't credible or whether they accepted what was said by the administrators. They also said that the school has a STOP app that students can report incidents on.

They both also agreed that students need to start using the STOP app, if they do not; there isn't a lot that can be done. All board members want a safe and healthy environment for the students.

Each candidate agreed that distance learning was nothing like physically attending school. The absence of activities along with the lack of social experiences is not good for anyone.

The candidates also agreed that the school has provided resources to the students with respect to distance learning by making sure each student has a Chromebook and access to Wi-Fi.

"I don't think distance learning is teaching," Ackernecht said. "The district is doing its best in providing for the students."

He mentioned that at the last board meeting, Assistant Superintendent Rob Cobb presented a plan for the return to school.

"Currently, there are 45 unaccounted students," Nicol said. "We would like to have everyone engaged."