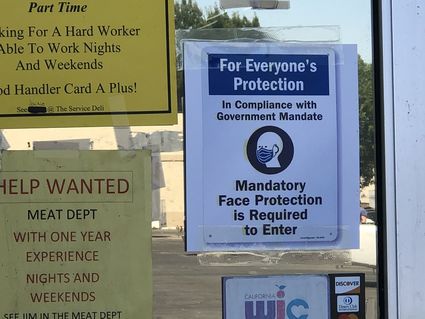 Apple Market was one of the last holdouts in Shafter, but now has posted a sign requiring masks to be worn in the store.

The cities of Shafter and Wasco, which had high hopes when Gov. Gavin Newsom reopened the state with certain precautions, have seen those hopes dashed with an increase in cases that has made it necessary for the cities to take a step backward.

Most of the businesses in Shafter and Wasco now require a face mask to enter, and restaurants have seen their dine-in options thwarted again. Those establishments that have outdoor dining space can offer that service for the time being, with the rest of the restaurants going back to take-out and delivery only. 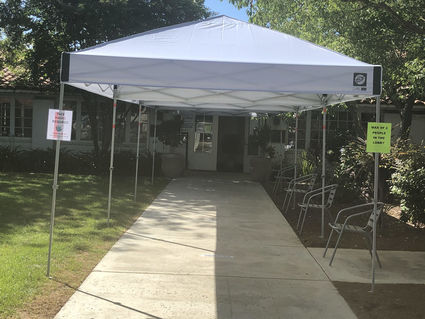 The City of Shafter is still recommending making an appointment for most of the services offered at its city buildings.

The number of businesses seeking relief from the different programs being offered by the county and the state continues to grow. Even the few holdouts in Shafter, including Apple Market and Big Stop, which didn't require face coverings, now have signs posted that customers must wear masks to enter.

To date, there have been two confirmed deaths in Shafter and Wasco, with husband and wife Billy Joe and Gloria Cox passing away within days of each other from covid-19. Shafter now has 224 confirmed cases, with 133 of those cases recovered, while Wasco has had 222 cases with 99 cases reported as recovered. Percentage-wise, that means that about 1 percent of Shafter's population has been confirmed as having the virus, or about one in one hundred residents.

Shafter is still having its city buildings remain open, with face masks required to enter, and the majority of the operations in the buildings are recommending that you make an appointment before going to City Hall. You can also take advantage of the various online services, such as bill-paying for -certain utility bills.