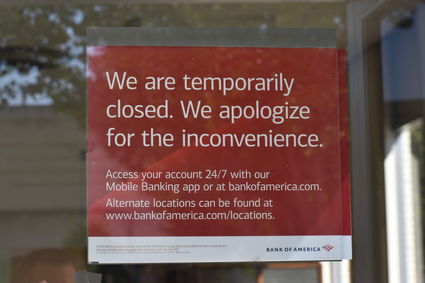 Most branches of Bank of America in Kern County have temporarily closed due to the COVID-19 pandemic.

The coronavirus continues to affect Shafter, with the closures of the local Bank of America branch and the DMV office. Customers at Bank of America were found waiting outside of the local branch a little after 9:30 a.m., waiting for them to open at 10. A sign posted on the door said they are temporarily closed.

Juan Moreno said he looked online and it said that the bank would open at 10 a.m. By the time 10 arrived, there was a line of confused and frustrated people waiting to enter. When they realized the bank was not opening, frustration turned to anger.

"What am I supposed to do? I need to get my money out, and I can't do it," said Moreno. Monique Jones said she hates the fact that she will be charged to get money out at a different ATM.

"Every time I get money out I get charged two or three dollars," she said. She added that you can't get as much cash out at other machines as she can at the Bank of America branch where she has an account.

"I can get $900 out here, but other places, the limit is four or five hundred dollars so I end up paying like ten bucks to get my own money out," se said.

According to Holly O'Neill, head of Consumer Client Services for Bank of America, said they are working hard to make the closures as brief as possible. "Nothing is more important than the safety and well-being of our clients and our staff," she said. "Their safety is our top priority."

For several days, Bank of America customers were frustrated because the ATMs were not able to give out any cash. This resulted in lines outside the bank when it was open, with customers waiting to enter. Days later, with no announcement, a sign at the branch said it was temporarily closing for the protection of its clients and staff. 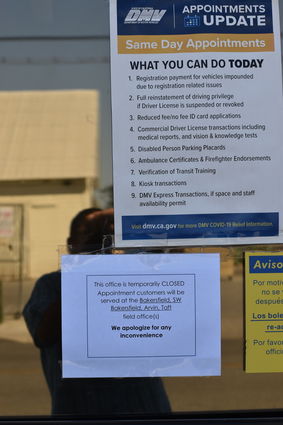 The Shafter DMV was closed while the building is sanitized.

With the closures of its financial centers, the Bank of Amerca drive-thru ATM locations are still available as well as the branches' ATMs. Bank of America said it is increasing its ATM maintenance schedules because of the spike in usage due to the closures. The branch ATMs in Shafter were out of cash for over three days because of the increase. They also said clients can do their banking online and with their mobile app.

The local DMV office was closed on July 6, because a staff member tested positive for COVID-19. An announcement from the DMV said, "The office will be temporarily closed until the building can be cleaned and sanitized." A sign at the location said that people with appointments would be served at their other locations in Bakersfield, Taft and Delano. There are still items that can be taken care of without visiting the office by going online to dmv.ca.gov.