The classes of coronavirus

Virtual graduations for some 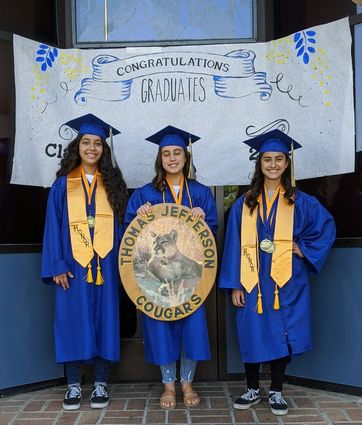 Celebrating graduation for 2020 was a new experience for all involved, including students, staff, parents and administration as Palm Avenue and Thomas Jefferson schools celebrated their ceremonies virtually on Facebook.

On May 27, Palm Avenue eighth graders were able to pick up their diplomas at the school and students were the first of the two middle schools to celebrate their graduation ceremony.

A virtual tour of the campus opened the program, highlighting the new Richard Reding gymnasium and how the district converted the school from an elementary campus to a middle school, with a focus on the new offices that have street access and a different student access.

Caban brought back Richers, who praised the students for conquering the difficulties of the school year after the schools closed due to the Covid-19 pandemic and teachers started teaching online. Students with no internet access picked up schoolwork packets to complete class assignments.

"We are here because this was supposed to mark the first of the two graduations of our two middle schools," Richers said. "We are very glad you are here. This year will shape many years to come for many of you."

Richard Reding congratulated the students on one of the milestones in the students' lives. Reding accepted the class of 2020, "to be known as the high school class of 2024," he said.

Vice Principal Zach Ellis congratulated the students and said that this is just one of the many adversities they would endure throughout their lifetime.

Valed Rigoberto, Kylie Perez, Natalia Crane and Joseph Scott were each named valedictorian and addressed their classmates with an offer of hope, determination and asked each of them to reach for their dreams and to never give up.

The end of the ceremony included an announcement of each graduate accompanied with a graduation photo. 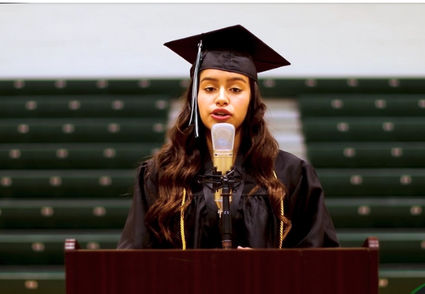 As students arrived at the school in the morning, they were welcomed by the sound of "Pomp and Circumstance." Staff and teachers greeted all students as they made their way to picking up their diploma.

The students were also welcomed by an administrator who gave them instructions on how to access the virtual graduation ceremony.

Zayda Orpineda Herrera was recognized as the Salutatorian for this year's class. Both students received a sash and medal in recognition of their accomplishments.

Graduating students were named individually with their pictures displayed and for any academic accomplishment.