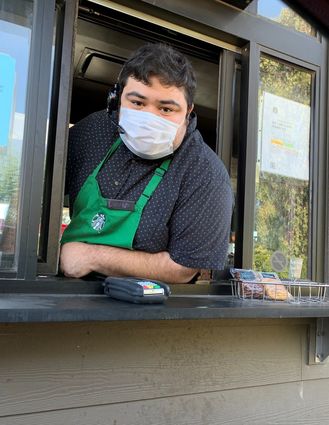 Local restaurants are coming alive in varying degrees, with some opening fully and still others taking smaller steps.

In Shafter, the entrance into Phase 2 has meant different things to different people when it comes to the restaurants in town. A few of the restaurants have opened back up, with limitations according to the guidelines set up by Gov. Gavin Newsom and the Kern County Public Health Department.

On one end of the spectrum is China Cuisine, run by Scotty Dang. He said that they opened back up on Thursday, with business being a little slow so far. "I think that some people are still a little nervous about going back into restaurants right now. It will get busier, it will just take a little time."

Enjoying the reopening was Mike and Kathy Enns. The Ennses and Dennis Atkinson were dining at China Cuisine for the first time in months.

"There is a group of about eight or 10 of us who meet here every Tuesday for dinner. We have really missed it," said Kathy Enns.

They have still enjoyed the food at China, but it has been take-out only. Dang said that once they got the okay to open back up, they didn't hesitate, wanting to get back to fully serving the community. Though the restaurant is opened back up, the popular buffet has not been started back up yet.

"We decided we better wait to start up the buffet again, until we feel more comfortable bringing it back. The same thing with the salad bar, we will open that back up soon."

At Tony's Firehouse Restaurant, it was business as usual, except with a fraction of the clientele. We were told that there are using every other table in the establishment, making sure that there is six feet in between the tables, making the maximum capacity at 50 percent.

On the other end of the spectrum is La Fonda Restaurant. The restaurant enjoyed a brisk take-out business during the pandemic, and still has its booths and tables taped off. "We might open back up on June 1 or maybe on the 15th," Maria said. "We have not received a letter or anything saying that we can open back up, so we are waiting."

All of the fast-food places in town are open for business,for dine-in and take out. Once Kern County's Phase I of the recent COVID-19 pandemic began to lift, restaurants hesitantly began to open their doors to customers to begin providing dine-in service. Customers and business owners began to breathe a sigh of relief as soon as businesses in the state began to open.

Two months after the governor issued a stay-at-home order that closed most businesses, Newsom said that restaurants could reopen for dine-in service in counties certified as meeting state rules and regulations for addressing the pandemic, but they should make changes to make sure the virus doesn't spread.

Before a business reopens, a county must complete a risk assessment and develop protection plans that include training employees how to limit the spread of the virus and:

[BOX] Draft a plan to protect customers, including a method of screening employees to determine if they are sick.

Counties must have adequate testing and hospital rooms with the ability to trace those who have been in contact with ill people.

In Wasco, one of the restaurants that was able to maintain solvency was Hoyett's Sandwich Shop on 6th Street. Hoyett's announced on Facebook Tuesday that they are doing some sprucing up inside and for the rest of this week, they would be taking drive-up and call-in orders only. Hoyett's announced they will be ready for dine-in June 1.

"We will be taping off booths that customers cannot sit in," Lydia Adams said. "Everyone working will wear their mask. We may have one stool open at the counter, but the rest will be removed."

During the quarantine, Hoyett's offered heir catfish and tri-tip dinner plates on the weekend; in addition, with many of their regular plates discounted.

Another popular restaurant in Wasco is Catrina's Mexican Grill and Cantina, on F Street. Catrina's offered take-out specials during the week and provided curbside service. It was closed Wednesday morning, with no sign of when they would be open.

Teresa's Mexican Restaurant served customers with their drive-up and call-in orders. The parking lot usually had one or two cars in the parking lot during the quarantine. Now that Wasco is headed for a Phase 2 opening, customers are now welcome to dine in under the guidelines.

None of the customers in Teresa's were wearing masks.

Mike McCurdy was enjoying his breakfast by himself midmorning. He laughed when I asked for a picture and said, "Now my wife will know where I am." 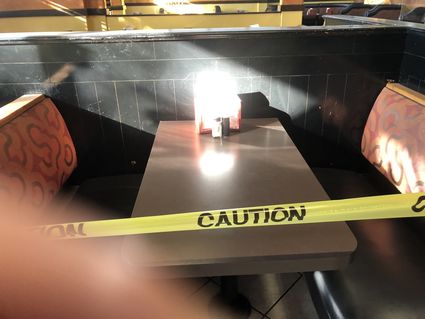 The caution tape at LaFonda is still up.

Also dining at Teresa's at the opposite end of the restaurant were Stormy Byrd and Bob Peters.

While discussing the recent quarantine, Peters expressed his frustration. "We didn't close the country down for the war," he said.

"This was a political move," Byrd said. "The president was against closing down the country, but the opposition wanted the country quarantined and shut down causing so much trouble in businesses."

Both agreed that it was good to be able to dine out again.

Cars were lined up outside waiting for drive-up service.

"Because of how our dining area is set up with the big table in the middle of the room, we won't be allowing dining inside for a while," employee Danny Dominguez said. "Customers can come in and order and leave right away."