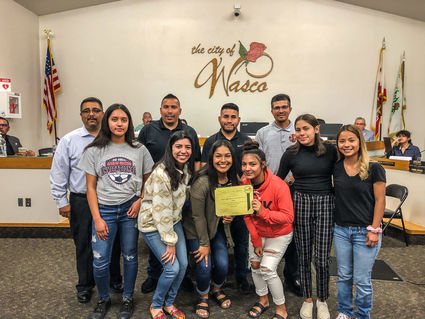 It was student government day at Wasco High School and several students shadowed the council members at Tuesday night's meeting.

At the session, the City Council had the students lead the Pledge of Allegiance, open the meeting, conduct the meeting and close it.

There were two presentations, with the first being recognition of the varsity girls soccer team for taking first place in the South Sequoia league for the first time ever.

The council members congratulated the players in unison for their season.

The second presentation was given by the California Health Collaborative group UnidosporSalud.

Community Engagement Coordinator Celeste Ramos and Program Manager Jennifer Acidera described to the attendees the dangers of smoking tobacco. Their goal is to restrict the sale of flavored and menthol tobacco. They also want smoke-free policies for multiunit housing and to engage youth in tobacco prevention programs.

They also have a goal of engaging with Hispanic/Latino youth to lead them to become advocates for nonsmoking. 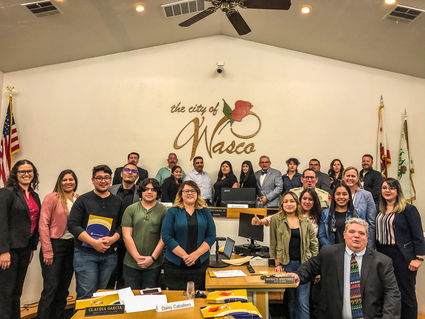 WHS students shadowed City of Wasco employees for a day.

Acidera described what a Juul, the newer vaping device, is. She said that a Juul is a brand of e-cigarettes that looks like a USB drive. "Juuling carries nicotine throughout the body that can have long-lasting effects on the adolescent brain and body," she said.

The nonprofit is concerned that because flavored tobacco tastes sweet, the youngsters won't realize how harmful it is.

"One Juul is equal to one pack of cigarettes," Ramos said.