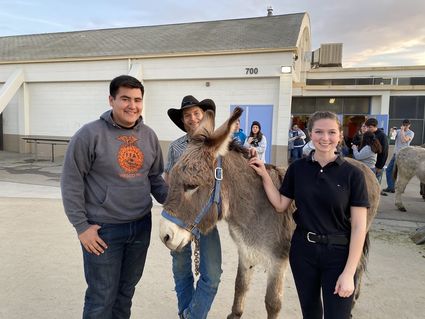 Wasco High FFA students discovered several of their animals had been attacked by dogs last month.

In the first attack, on Jan. 16, an adult male goat was killed. The next attack, on Feb. 7, left another goat and two young female sheep injured. One sheep died later; the other continues to recover.

On Feb. 10, four pregnant female goats were attacked and one was killed.

The total loss is approximately $2,000, but is dependent upon whether the pregnant goats lose their babies.

"In the 22 years that I have been here, we have had several attacks," Agriculture Department Chair Denise Morales said. "I cannot remember the exact number, but there was an attack some years ago where 10 to 15 sheep were killed at one time. Adult pregnant sows have also been attacked, not just sheep and goats."

Morales added that the kids have been worried and upset. "They work closely with the animals and have helped bottle feed them, care for them etc.," she said. "Any death is upsetting, but these deaths are heartbreaking."

The animal attacks are the result of a lack of protective fencing surrounding the FFA farm.

Morales approached the WHS Board of Trustees at their Feb. 13 meeting about the issue and how a fence surrounding the whole farm had become a necessity.

About 24 FFA members were also present at that meeting to show their support of the fence. "We, as members of FFA, stood to show our awareness of the issue," FFA Chapter President Haley Allen said. "We were able to gain a better understanding of how the board deals with these types of issues."

Morales added that everyone "is hoping and praying" for no more attacks, especially since the babies will have to come out of the barn soon.

The dogs did not attack in the areas where there are protection animals.

"The FFA purchased a rescue donkey," Ag instructor Anthony Farao said. "The donkey, Twitter, is a protective donkey and will provide safety from attacks."