Next Friday, playoffs move to #2 Selma 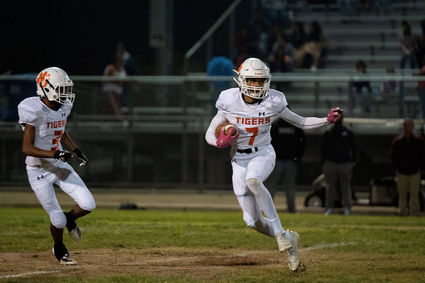 The #10-ranked Wasco Tigers defeated #7 East Bakersfield High in the first round of the Valley Championship series Saturday night.

A missed field goal was the difference in the hard-fought conference at East, with a final score of 14-13.

The Tigers answered right back to tie the game with a 44-yard touchdown run from Christian Alvarez. The score was 7-7 early in the second quarter.

The Blades answered right back as they drove down the field and through to the corner of the end zone to take the lead. They missed the extra point, making the score 13-7.

Right before the half, East was driving down the field again. In the red zone, the quarterback dropped back to pass, threw and got picked off by Andre Cordova. That took the game into the second half.

The start of the second half, the Blades were to receive, but the Tigers came out and kicked onside and recovered the football. That set the tone for a very aggressive second half. 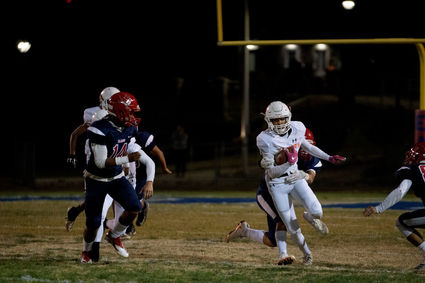 Andre Cordova with the carry against East.

Both teams fought back and forth with the ball, but neither would strike. That was until 3:40 was left in the game, when Jacob Villenueva threw a 40-yard reception to Sean Sharp. The Tigers made the extra point and led 14-13 deep in the 4th.

Then it was East's last chance with the ball, and the quarterback scrambled for a few first downs, but it was too little, too late as the Tigers won to move on to the quarterfinals.

The player of the game goes to Sean Sharp for his clutch touchdown for the Tigers.

Next Friday, the Tigers (6-5 overall, 3-3 in the SSL) go up against #2 Selma on the road, with a 7 p.m. kickoff in the second round of the playoffs. The Bears had a bye in the initial round of the Central Section CIF Les Schwab Football Championships