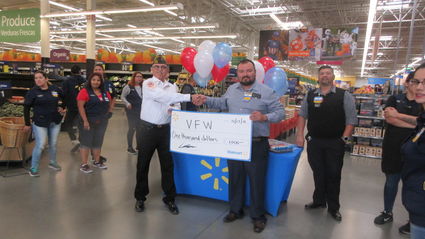 Commander James Madrone shakes hands with Store Manager Joel Vidriales as he accepts the $1,000 donation from Walmart for the VFW.

Walmart donated $1,000 to the VFW and this isn't the first donation from Walmart this year.

"The money will be used to repair some battery-operated wheelchairs we accumulated this year," Commander James Madrone said.

Walmart also donated man hours when the VFW volunteers painted the white crosses that are placed in the cemetery on Memorial Day weekend.

A familiar person in the Walmart mix was Jamie Nixon who is manager of the children's department and also a member of Grace Community Church.

Nixon was also one of the many volunteers who assisted at this past weekend's Wasco Festival in the city's cornhole booth.

Human Services Manager Veronica Bristowe was on hand to greet the public. 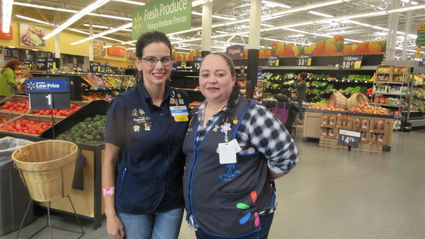 From left, Walmart managers Jamie Nixon and Terri Rocha look at the donation.

Store Manager Joel Vidriales has been the manager in the Wasco store for about one and one-half years and before that worked in other Walmart stores for 21 years. "I like working for this Walmart," Vidriales said. "It is like one, big happy family."

Commander Madrone thanked Walmart for its generous donation and stated it has been a pleasure partnering with them for the past couple of years.

"Walmart donated a palate of bottled water to all of the sheriff's stations and police departments in Kern County," Nixon added. "We also donated $2,500 to each law enforcement department."

Bristowe noted that Walmart employees do a lot of local volunteering for community nonprofits.

"Walmart cares," Bristowe said. "If we can be there, we will be."