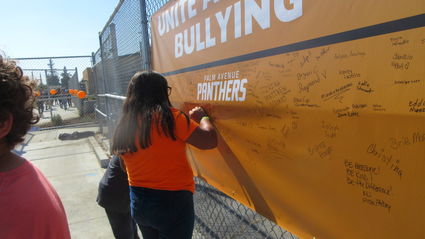 Students sign a pledge sheet, pledging not to bully or do drugs.

On Oct. 23, the school held its first Unity Day, and everyone was asked to wear orange shirts to school. The day was set aside to begin the campaign against drugs and bullying.

During both lunches, the school held assemblies where Principal Oscar Luna shared that Red Ribbon week isn't just about saying no to drugs, it's also about paying kindness forward.

In recognition of Unity Day, owner Russ Atkins of Pizza Factory donated a "buddy bench" to the school so that if a student is spotted eating lunch alone, that student will be joined by a "buddy" for lunch. 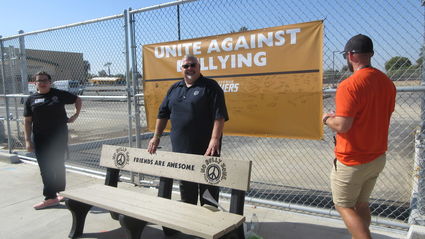 "Pizza Factory is always involved in the local community," Atkins said. "We have donated over 75 "buddy benches" to schools.

"Kindness isn't just for today, it's for every day," Luna emphasized.

Luna stated that when an adult shows up, the bullying stops and the power is taken away from the bully.

He also mentioned that oftentimes bullies are students who are afraid and don't know how to express their fear.