Rotary gets the word on Homecoming -- from the coach 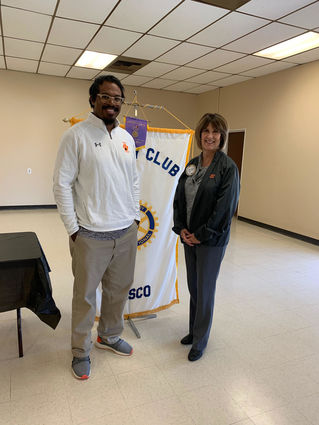 With fall comes football season, and for high schools, Homecoming is all about the week of activities leading up to the football game on Friday night.

This Friday night, Wasco High School Tigers will play the Cesar Chavez Titans at home. To get everyone pumped for the game, the Wasco Rotary invited the varsity football coach, Chad Martinez, as a guest speaker.

He was introduced by Superintendent of Wasco Union High School District, Lori Albrecht. Albrecht mentioned that she wasn't all that knowledgeable about football; however, the principal of Independence High, Martin Lonza, begged to differ ,since Albrecht's grandson is a star quarterback at Stockdale High, and she and Lonza now talk football.

Martinez was introduced as a great coach and math teacher. He hit a few bumps along the road during his first year, but things have smoothed out this year.

One of the highlights of the Tiger's team is when they operate the double wing-T offense. In layman's terms, this is when the center snaps the ball to the quarterback while the backs are on each side of the quarterback ready to make whatever play was decided upon in the huddle.

"This is a good strategy because it can confuse the opposing team when they don't know whether the quarterback is going to run with the ball or hand it over to either his right or left," Martinez said.

He explained that Wasco focuses on an offensive running game instead of a passing game.

In the past, Martinez explained that the game plan depends on resources. "It depends on who is available to catch the ball ... whether or not we change our strategy. It's still early in the season to make such a change from a running offense to a passing offense." 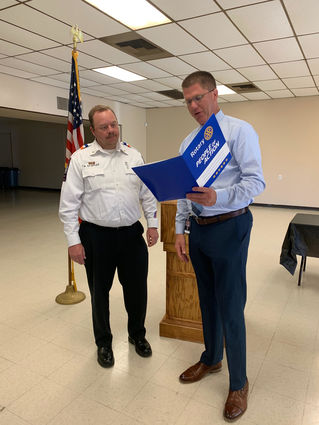 The football team started with 120 players and now has 105. Martinez described his team as being hit by the "injury bug" this year. "One of the best players has two broken bones," Martinez said. "He is out for the season."

Martinez added that after the game in which his player was injured, four or five more injuries plagued the team when they played North High. "North plays a very physical game," he added.

Rotary President Kevin Tallon told everyone that the school uses a drone to film every practice. "From a VHS on your shoulder to using a drone today... we see beautiful, clear pictures and different angles of safety."

Martinez also mentioned the drone is used to focus on individual players and monitor injuries.

Martinez is looking forward to the final contest of the season against Wasco.