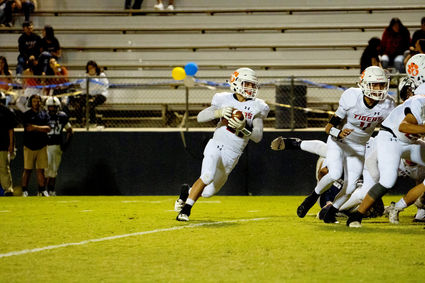 Alejandro Prieto runs for a touchdown (Photo by Victoria Zarate)

The game kicked off with strong defensive play on both sides of the field, each trying to help their offense to strike first. The first touchdown went to Wasco, with an 11-yard burst from running back Christian Alvarez.

The following drive for Delano ended quickly, with an interception by Wasco Safety Andre Cordova. In the next quarter, Alvarez was running for a sweep and got his helmet completely yanked off by a Delano defender. He returned after being out for one play and scored yet another touchdown for Wasco.

On Wasco's next offensive drive, Rodrick Scott beat the Delano defenders to the edge for a 30-yard sprint to the end zone for another six points.

To kick off the second half, Wasco's defense made a huge interception by Julius Mazano. That led to a long drive down the field, finally to be punched in by Alejandro Prieto. 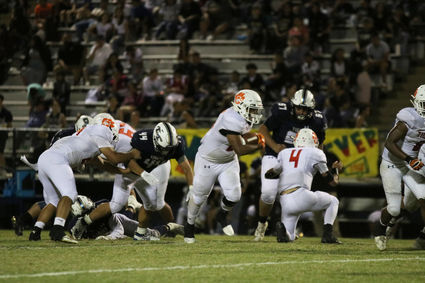 Misyn Lane runs for a gain. (Photo by Gladis Castillo)

Delano found some spark with a couple of big plays that led them to the red zone. This only to be ended with another turnover by Wasco's defense, with a fumble in a handoff and Wasco's Misyn Lane coming up with the ball.

Wasco then closed out the game with a final touchdown by quarterback Jacob Villanueva.

Both Wasco's freshman and junior Varsity teams won their matches in Delano. The freshman took their victory 22-8 on Thursday, and the JV blew out Delano 54-0 on Friday.

The Tigers are back on the road this Friday against Robert F. Kennedy at 7.30 p.m. The junior varsity game kicks off at 5 p.m.