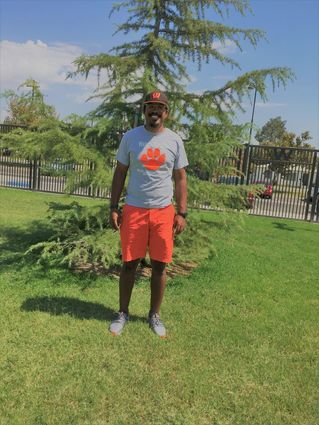 Wasco High's varsity football coach, Chad Martinez, thinks the Tigers may take it all the way to the finals in this year's season.

Martinez greets anyone who steps into his classroom with a smile and a welcoming attitude. "We have a well-oiled machine working in Wasco," he said.

Martinez spent a year as football coach for Delano High School before arriving in Wasco. He has previously coached basketball, soccer and track, but football is where his heart lies. "This is my 10th year of coaching," he said. "I take pride in what I do."

Although Martinez was born and raised in the Inglewood section of Los Angeles County, he has adapted well to life in the Central Valley. "I love the smaller communities where everyone works together," he said. He added that he enjoys the way his circle of friends expands the longer he is at Wasco High.

One of the highlights of the team is when they operate the double wing-T offense. In layman's terms, this is when the center snaps the ball to the quarterback while the linebackers on each side carry out whatever play has been decided upon in the huddle. "This is a good strategy because it can confuse the opposing team when they don't know whether the quarterback is going to run with the ball or hand it over to either his right or left linebacker," Martinez said.

He said Wasco prefers to play an offensive running game instead of a passing game. "It depends on who is available to catch the ball, whether or not we change our strategy. It's still early in the season to make such a change from a running offense to a passing offense."

"This year's team is more focused, and they understand and play faster than last year," he said. "We realize how good we were last year and will continue that."

"I consider Shafter High and Kennedy High the two teams to beat this year," Martinez said.

He also mentioned that because the offense was so good last year, he feels it enabled the defense an easier path to protect the end zone. "We have a very talented wide receiver in Andre Cordova," he added. "He's very good."

Martinez loves being involved in the football fever that hits the city during football season. "The Bear Boosters, alumni and everyone else has been so welcoming and supportive," he said. "With dinner prepared for the players and coaches before every home game, the community has stepped up to support everyone involved." 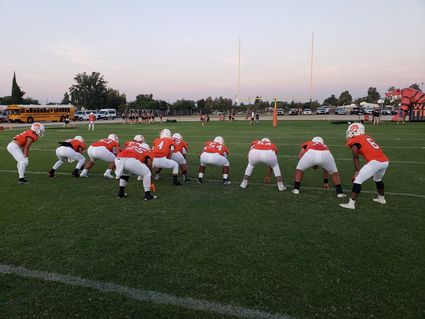 In addition to football and teaching, Martinez has a new family with twin boys born last August. His spare time is spent with his wife of five years, Marcela, and twins, Kash and Kodi.