Council to invest in safety

Followup to student injury in accident 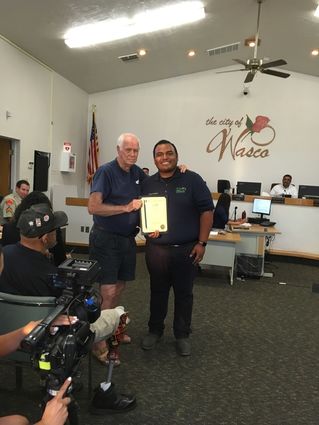 Mayor Alex Garcia presents WUESD board member Richard Reding with a proclamation for his contribution to the community and the school district.

In response to an accident that occurred in February when a student was hit by a car while walking to Palm Avenue Elementary School, the City Council took action Tuesday night on making streets safer for pedestrians.

The city will pay $11,000 for a study to improve safety, which includes protecting children walking to and from school. The council unanimously approved the city manager entering into an agreement with Ruettgers & Schuler to perform a pedestrian crossing investigation at three locations:

Councilmember John Pallares requested that the council look into not only adding crosswalks to the streets, but also adding a stop sign, street lights or a blinking sign.

The council decided to bring this item back at the next meeting Tuesday, Sept. 17, to discuss the additional costs of adding a street light or lighted street sign at the crosswalks. 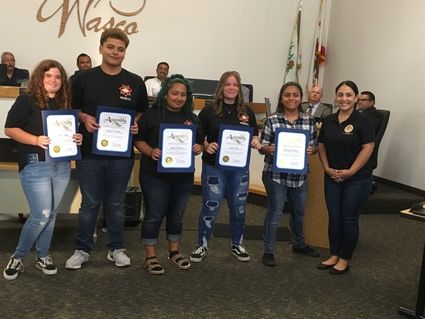 A heroic five were recognized by the council. From left are Hailey Adams, Jaime Fernandez, Hailey Medrano, Leila Adams and Monique Rodriguez.

The five received a proclamation by Assemblyman Rudy Salas, too, and Sergeant Martinez presented each of the five students with a gift card recognizing their heroics.

Another proclamation was presented to Wasco Union Elementary School District Board Member Richard Reding, recognizing him for his years of service to the district and his contributions to the city. He was recently honored with the opening of the Richard Reding Gymnasium at Palm Avenue Middle School.