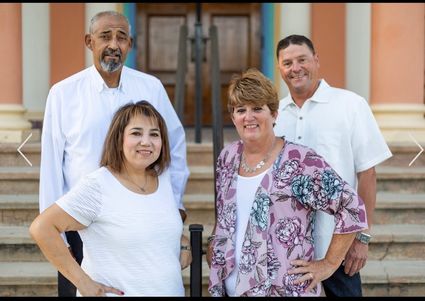 Danny and Petra Rueda and Kenny and Tina Newman. (Photo by Vince Martinez)

While Ken and Tina Newman have been overbooked for a long time, they did take some time out to answer questions as co-grand marshals for the 2019 Rose Parade and Wasco Festival.

These two are the worker bees behind the scenes that make things happen.

Tina has in the past and continues to volunteer for Relay for Life, Toys for Tigers, the Rose Pageant and PEO Sorority while managing to work full time at Community Support Options for disabled adults 18 years and older. Ken has also volunteered for 20 years for the Knights of Columbus, Toys for Tigers and the Rose Pageant and works for Certis, a biological insecticide plant.

Tina describes the PEO Sorority as an organization that promotes the education of young women.

Also, they both volunteer at Wasco's Tiger Cage Crew, which is for football season ticket holders who get selected seats in the stands and a meal at every home game. "The season tickets are on the 15-yard line," Ken said.

Since they are both Wasco born and raised, there exists no other team than the Tigers for the two of them. But, Tina confessed to a Dodger obsession.

Additionally, Tina added that she loved to work in the background instead of in the forefront.

"I don't like to be highlighted," she said. That's why when the committee contacted her to ask if they would be co-grand marshals, she immediately thought they wanted her to work on the committee; but she was surprised when they asked both of them to be recognized for their commitment to the community and for giving back so much.

Tina added that she is involved in the flocked flamingo's fundraiser that are already being rented and displayed in several front yards around town.

The two own a motorhome and love to travel in it. "I'm the designated driver," Tina said. As she explains it, she drives a bus that can seat 40 for work so she is the more skilled of the two in that area.

"We also do food baskets for seniors and needy families during the holidays," Tina added. "We get the names from many different organizations within the community, and we don't question, we just act on their suggestion."