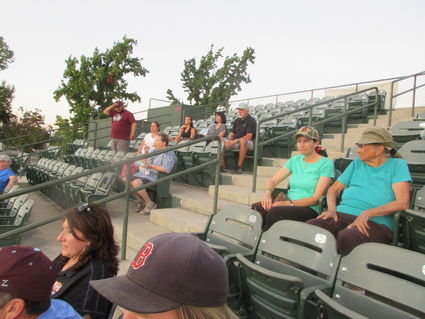 The stands were sprinkled with attendees in every section of the park.

The Reserves are coming back to Wasco next season, and will even expand into a winter league starting in February. But they will be called something else, says owner Andrew Dunn.

Fans can also look forward to lower ticket prices, the Pecos League president said. The $7 gate admission for adults seems to be too high, he said in a telephone interview from Las Cruces, N.M.

According to the Wasco Reserves' schedule on Wednesday, July 25, they still had at least two more home games to play in this inaugural season; however, that changed on Thursday when Manager Bill Moore and the players were informed their last game in Wasco would be Thursday, Aug. 1, and their very last game of the season would be Friday, Aug. 2, at Sam Lynn Ballpark.

"None of us found out about the schedule change until Thursday at about 2:30 in the afternoon," Coach Bill Moore said.

Even though the Reserves were playing the California City Whiptails, there were a lot of Bakersfield Train Robber fans wearing their Train Robber t-shirts in the stands. This shows that the teams have a solid following of fans who don't care what teams are playing – they just want to see a baseball game.

With several different bleacher sections available sit in, it was difficult to know how many Reserves fans attended the game. But there were definitely fans of the Reserves at the last game.

Families hosting players for the summer were at the game to support the team. The evening began with the singing of the National Anthem by Johnny Gonzalez.

The score was tied 0-0 at the end of the first inning, but by the second inning, the score was 3-0, with California City ahead. 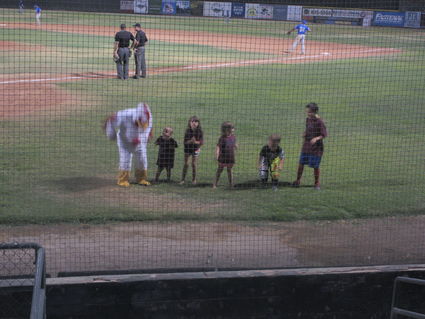 The Whiptail mascot led youngsters in the Chicken Dance.

During the fifth inning, California City garnered another run, while Wasco had two. Luke Jackson hit a home run and the score became 4-6, with California City still in the lead.

Both teams changed out pitchers several times, until Alex Hernandez pitched until the end of the game.

"In the sixth inning, center fielder Tyler Dupree made a double play by pulling up a hit, snagging a hard grounder, touching third base and throwing it to second.to get two outs," player parent Dave Williams was heard explaining to onlookers after the play.

While the game was a close one, the Whiptails beat the Reserves, 6-5.

After the game was over, several players had pictures taken with Coach Moore.

According to Moore, he changed his original plan to leave Wasco on Monday, Aug. 5, and left Saturday morning, heading back home to Arizona.