Reserves 'going to get better'

A tough start in first year 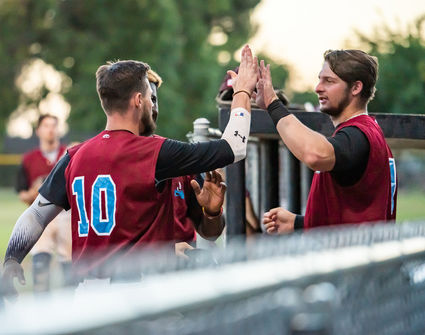 Reserves celebrate in their first victory.

Despite a tough early season, the Wasco Reserves are hoping to turn things around in their inaugural season.

"We're going to get better. I promise you, we will get better," Coach Bill Moore said after their loss on Tuesday night to the Bakersfield Train Robbers, 3-2 at the Ballpark.

And it has been a tough season so far. At 3-9, the Reserves sit in bottom of the Pecos League standings.

But Moore sees some light ahead.

"We have some good players, just not enough of them," he said. This is his fourth startup team, so "there really haven't been any surprises."

"We've got everybody a place to live, so no more hotels. The fans are really good people, and I really like the city."

Players stay with host families in town, and as of early this week, everyone's covered, he explained.

"There's no other place I'd like to be," the longtime coach said.

The Reserves return from a road trip to play the Tucson Saquards at the Ballpark Saturday and Sunday at 7 p.m., Tuesday against the Bakersfield at 7 and Wednesday back against Tucson at home.