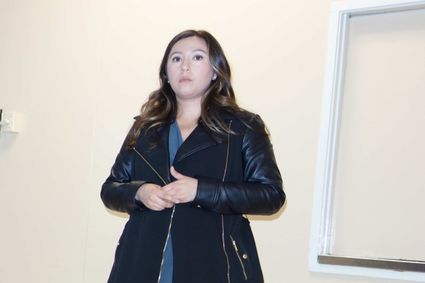 The Central Valley leg of the state's High Speed Rail is moving forward despite plans for funding cutbacks for the project as a whole, according to a spokeswoman addressing the Wasco Rotary Club on Monday.

Public Relations Toni Tinoco gave a slide presentation to the attendees outlining the positive aspects of the High Speed Rail under construction in Wasco.

Questions arose from audience members as to the viability of actually having the project continuing after Gov. Gavin Newsom's announcement that he intends to scale back California's $77-billion bullet train project stunned many officials close to the project while also raising many questions about what it actually means.

According to Tinoco, Newsom did not cut the HSR.

"If people would really look into what he said, he did not say that he was canceling the project," Tinoco said. "He said that the state could complete the first portion of the HSR a step at a time, and that going to the Bay Area would be too costly and take too long."

After President Donald Trump announced he was pulling over $900 billion from the project, doubts caused workers to call the HSR Authority offices and find out if they were going to be able to continue working on the central valley portion.

While funding for the HSR has constantly been an issue, Tinoco stated that it would be great if a private investor would step up to help solve this complicated situation.

A visitor to Wasco, Dave Williams from Vancouver, Canada, said Europe's HSR is amazing and he is impressed that Wasco is preparing for the first step in achieving this milestone in this country.

"If people only knew how great the HSR is, they would embrace it immediately," Williams said. "My wife is from Belgium, and we traveled on it throughout Europe."

The impact of discontinuing the project would mean significant issues for those who sold property to the state for the HSR, relocating the migrant camp and building a new one could bring another set of unanswered questions.

On Highway 43 just outside of Wasco, two large pieces of machinery that are prepared to begin working on the HSR. Right now they are sitting idly on property waiting for the signal to begin.

Tinoco began her presentation by stating the benefits of having a HSR in the valley, such as improving air quality and increasing mobility.

"HSR is used all across the world," Tinoco said. "The San Francisco and Los Angeles airports are the busiest in the United States, and we need alternative means of travel." The state project's goal is to connect the state's two major cities.

Tinoco added that the HSR will run on 119 miles of track from Merced to Bakersfield.

Tinoco added that a lot of jobs have been generated through this project.

"We are committed to have the project ridership by 2028," Tinoco added. "First we need to get the valley block open, which will include Merced, Madera, Fresno, Kings/Tulare and Bakersfield."

Tinoco also stated that the HSR Authority is working with the City of Wasco on how the project affects Wasco Avenue. "This will not be a permanent closure, only a temporary one until construction is completed on that portion," she said.

In other Rotary business, President Martin Lonza stated that the group gave away $7,500 in scholarships, along with other donations.