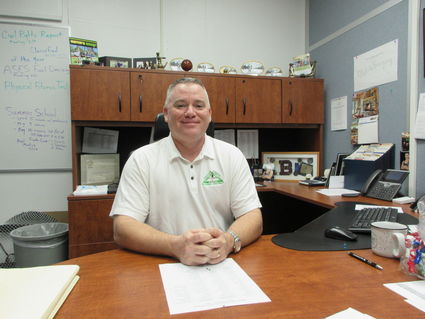 It's rare to find someone who has only had one employer during their entire working career.

Since he graduated from college in 1996, the assistant superintendent, Student Services, Brad Maberry, has only worked for the Wasco Union Elementary School District.

Maberry graduated from California State University, Bakersfield, in 1996 with a physical education major. He then got his master's degree in educational management in 2004 from the University of La Verne, and began teaching PE at Thomas Jefferson Middle School in 1996. Maberry has been with the WUESD ever since.

"I also hope to retire from the district," Maberry said.

Maberry taught PE for eight years in the district and also coached volleyball. He was the athletic director for Thomas Jefferson and coached track and field at Stockdale High.

Since he began at the district, he has moved into the administrative office as assistant superintendent, where he shares that title with David Bowling.

His primary duties encompass overseeing the welfare of each student at TJ. He monitors attendance and truancy at the school.

"There are certain procedures that have to be followed when it comes to disciplining a student when it comes to suspension or expulsion," Maberry said. "I oversee and make sure all the appropriate steps have been taken by the teachers and staff. We want to make sure these situations are handled fairly and without bias."

Maberry added that he is in charge of making sure all students' rights are being provided, and that each student is given due process.

Other duties Maberry has include communicating with parents when they want to involve him in a student-related issue.

He oversees the Title I program and its budget. "It's a $3 million piece of the overall budget," he said. "Title I money supports the at-risk students who are not at grade level."

Maberry also works with the high-discipline and foster students, along with homeless students.

"Because Wasco does not have any group homes in the area, our foster students are generally placed in individual homes," he said.

"The district classifies homeless students as those that share a home with another family – in other words, doubling up," Maberry explained.

"At the present time, the district has 12 foster students and 15 to 20 homeless students," Mayberry said.

In addition to his overseeing the at-risk students, Maberry also manages the district's registration process for the school year. "I coordinate kindergarten through eighth-grade registration," he said.

Maberry he has a grown son who is a sophomore away at college in Springfield, Mass.

"Tracy is a gymnast and will be working out at American Kids Gym in Bakersfield this summer," Maberry said.