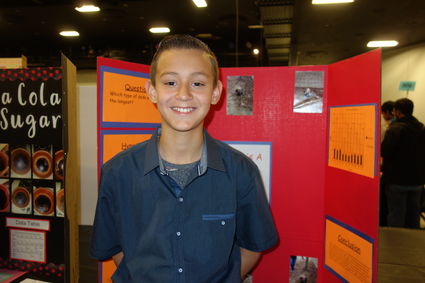 Roman Ballardo experimented with the carbonation of Coke.

Rabobank Convention Center was jam-packed with over 500 students anxiously waiting for their science projects to be judged last week. Wasco had 25 students exhibit their science fair projects at the county competition, with six winning awards.

Students were anxiously standing by their display boards while watching others being interviewed by judges. The judges were broken up into sections and went from display to display ready with their questions for the young scientists.

Juarez built three different types of bridges to find out which could hold the most weight. He hypothesized that the K truss – a type of framing -- would hold the most weight because there were two beams, top and bottom, and both connected to one truss (tie or bind or fasten). After building three different trusses, he determined the K truss did, in fact, hold the most weight. "The results I received were that the K truss was able to hold on average 36.3125 pounds, the Pratt was able to hold an average of 29.52777 pounds and the Warren truss bridge held 28.125 pounds," Juarez said. "This project is useful to me because it lets me know which bridge to trust." He stated that he wants to be become an architect. 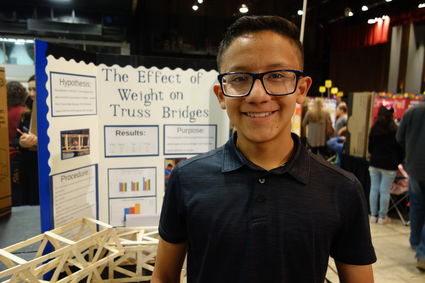 Erik Castillo compared fruits with vegetables to see which conducted electricity the best.

Sixth-grader Roman Ballardo from Teresa Burke compared whether Coke or Diet Coke held its carbonation the longest. His hypothesis said that Coke would keep its carbonation longer than Diet Coke, but his hypothesis was proven to be incorrect. Diet Coke was carbonated longer than regular Coke. "Next time, I'm going to try different kinds of soda instead of just Coke," Ballardo said. "But, I'm not sure I'll do the same science project again. I might think of something else."

Even though 1st and 2nd place winners are able to go to the state competition, the Kern County Superintendent of Schools office will decide which students get to participate in that event based on the quality of the project.