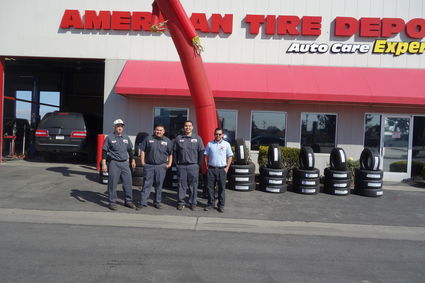 Shopping at American Tire Depot extends their relationship with their clients beyond the norm. The company provides several incentives to purchase and return again and again with their continued customer service.

One of the special deals that American Tire Depot provides is once you buy tires from the store; you can come in and get free rotation, balancing and alignment for as long as you have the vehicle. They even fix flats for free, whether or not you bought the tire at the store.

The shop is in pristine condition because that's how Manager Juan Sanchez wants it to be when customers come in. "I remember being 13 years old, and on my 14th birthday, working on Saturdays and Sundays at what used to be Wasco Tire, which was located in this very spot," Sanchez said. "This was in the mid-'90s."

According to Sanchez, one of the best parts of the job is being able to deal with customers and helping them with their problems. "Many customers come in saying they need a tune-up and are adamant that's what needs to be done to fix their car," Sanchez said.

"When customers come in and won't let us do a free diagnostic, they have returned unhappy because we didn't fix their problem," he said. "That's when we can sit down and I can find out exactly what their problem is. It sometimes turns out to be a completely different problem than what they indicated. Once you get the customer talking, it usually comes out what the issue is."

American Tire Depot provides free services and low-cost oil changes. "For an older car, the oil change could cost $34; however, for a newer car that requires synthetic oil, the cost could be as high as $65," Sanchez said.

Sanchez talked about how much the city has changed since the 1990s. "There used to be about four tire shops in town," he said. "Now there are more than seven."

"I've seen so many changes in Wasco," he said. "We used to grow roses and cotton; but now we have pistachios and almonds."

When asked what the most-expensive tire in his shop is he answered immediately:

"Michelin Tires. They are the best tire you can buy, and they are the most expensive." He explained that Michelin tires can sell anywhere from $199 to $250 a tire. 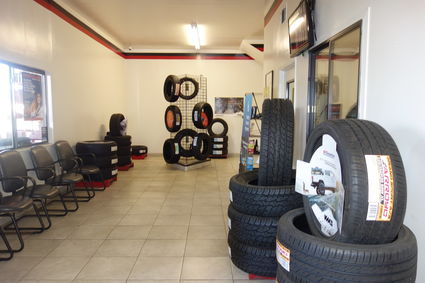 Tires of all makes and models are displayed.

"We have to have the higher price for the tires because there is very little markup on Michelin's."

American Tie doesn't just cover the high end, however. A customer can purchase a tire from American Tire Depot for about $33 each.

And he gave a tip to all drivers from a pro: Rotate your tires every 5,000 miles, even if the recommended rotation time is 6,000 miles. "Tires last longer when they are rotated, and this keeps the wear even on the tires," he said.

"Once you are a customer of ours, we will send coupons to you to save more money," Sanchez said. "You can get a coupon for a $19 oil change."