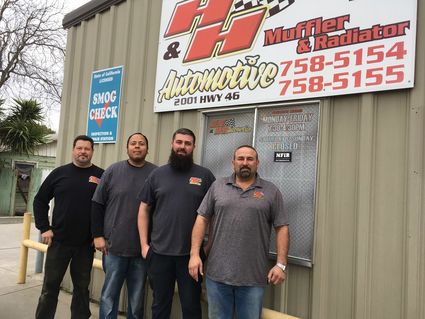 As you enter H & H Automotive at 2001 Highway 46, the first thing you notice is the place is busy with cars parked in every available spot on the property. Inside the office, there is an atmosphere of respect for everyone who enters the shop. Mechanics hustle in and out and often stop to chat with a customer before returning to the task at hand.

While owner Jose Robledo shows enthusiasm and warmth as he greets everyone who comes into his shop. He is enthusiastic about being in Wasco and says moving here and marrying his wife saved him from a life of hardship.

He is the head coach of the championship JV Wasco Bengals football team. He can't stop talking about how much he loves his players and how fortunate he is to have three of his former players helping him coach the team.

Robledo has worked at H & H Automotive since 1999 and purchased the business from original owner, Robert Hancock, in 1985. He kept the original name because of the years he worked with Hancock and wanted to show respect to his old employer.

Robledo says that taking care of customers' needs is his top priority. He has been known to leave the comfort of home at all times of the night if a friend calls and says he needs help with his vehicle. "I am the doctor of your car," Robledo laughas.

When he encounters a cranky customer, the first thought that enters his mind is, "I wonder what made his day so bad? How can I make it a better day for him?"

Robledo has three boys, and his oldest just graduated with a degree in criminal justice from California State University, Fullerton. "He was a Valley champion wrestler, swimmer and football player," Robledo said proudly. "My other two sons are 16 and 11 years old."

Robledo is a hard worker and has been working all his life. "When I was nine years old, my father bought me two large ice chests that he filled with soft drinks," he said. "He had me sell sodas from the back of his truck as he supervised field workers."

Robledo's passion in life is coaching the JV Bengals football team. He says that coaching relaxes him and gives him peace.

He's excited about the Bengals' mini-camp that will take place in March. "The camp is for everybody. All ages."

Even though he only played football for two years in high school, he can't seem to get enough of it. "I believe the coaches build good relationships," he said. "Each child I coach I treat as if he was my own."

"I emphasize prayer before and after each game. If a player or a parent doesn't want to participate, he asks them to just respectfully stand aside and have a moment of silence. I don't force anyone to pray." One player is asked to lead the team prayer at each game.

He also works on air conditioners. To check out a car's air conditioning unit costs $45, and for the extra $45 he will add Freon.

Additionally, Robledo mentioned that the most expensive part of owning the shop was purchasing tools. "I've spent over $20,000 this past year just on tools," he said.