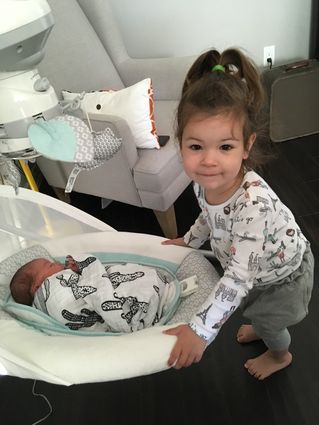 I had the most wonderful Valentine's Day this year because my youngest daughter delivered my first grandson on Valentine's Day. He is the first boy besides his dad to become a part of our immediate family, so he is pretty special.

My daughter likes old-fashioned names, and when her firstborn was named, she chose Lilah, and now Lilah is joined by Adley.

My heart is filled with so much love for each grandchild; it feels like it's going to explode. Until I became a grandmother, I never understood what my friends meant when they said grandchildren are special.

The family has enjoyed Lilah since November 2017, and she is pretty special. She looks a lot like my younger sister who passed away in 2011, so whenever I look at Lilah, I see Georgia and it makes me happy.

We all welcomed Adley with lumps in our throats and tears in our eyes as we all realized this may be the last grandchild for our immediate family. For some reason, we were all emotional and cracking jokes on the family text that continued into the weekend. Now, dad has a little buddy.

Lilah and Adley's mom is my youngest daughter of three, Laura. She was home with me the longest and became my shopping and movie buddy for years. Laura has always been the character of the family with her inability to lie and her quick sense of humor.

My memories of Laura growing up are the most vivid because she had funny things happen to her. When she was about 2, she was part of the neighborhood train with all the neighborhood kids riding their bikes pulling Laura as the caboose while she was on her tricycle. Of course, she face planted when they made a sharp turn and ended up with stiches on her upper lip, which luckily have disappeared.

Laura is my child who stuffed raisins in her nose as we were driving back from a visit to Gilroy one summer. This required an emergency stop at the doctor's office before we could even get home. Laura and I finished college the same year, but I delayed my graduation one quarter so she could have her own special party.

Unfortunately, in high school, Laura's crowd liked to party. One night she ended up staying with a friend who had drank too much and watched over her before dragging her friend to a school dance where she was immediately stopped by the dean for having alcohol on her breath. Luckily, they weren't drinking on campus but at a local park, so she wasn't suspended from school.

However, since Laura was a cheerleader and I was the advisor, I was supposed to punish her for drinking. She was not allowed to cheer at the Homecoming game that year and was given 20 hours of community service at the elementary school where I worked. Her comment on the entire incident was "I only had one 40." Poor Laura got caught every time she tried to get away with something.

Consequently, I get a lot of joy watching my family grow and feel truly blessed with what I have in this world.