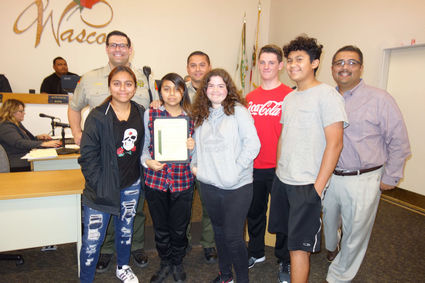 The City Council acknowledged SAL officers Sgt. Augustin Maldonado and Deputy Juan Maldonado for their work with the SAL kids They are pictured with four kids in the program.

Meeting the state's tighter standards for chemicals in drinking water and repairing an aging system is going to cost Wasco – initially about $750,000 and in the future $8 million to $10 million.

Because the state set new drinking water standards in 2018, and in order for the city to meet those new standards, it is in the process of installing treatment facilities next to existing well sites.

"There are five (I don't know how many there are will get Wed morn) wells located within the city," said City Manager Daniel Ortiz-Hernandez. At the last week's meeting, the city authorized payment of $734,531to Bakersfield Well and Pump to drill a replacement for Well #5 (at the northwest corner of 8th and G streets), and as a result of the Jan. 17 special meeting, the city council approved $50,631 to pay for repairs on Well #10.

At the Dec. 18 meeting, Bowman stated that the TCP improvements include purchasing property next to the existing wells; engineering is expected to cost $8 million to $10 million. The four properties discussed in the Jan. 21 meeting are located next to wells and will be used for treatment facilities.

"The majority of funding is coming from a settlement from those responsible for the contamination, from Dow Chemical Company and Shell Oil Company, et al," Bowman said. "Additional funding will come from water reserve funds."

On another topic, the council did not take action on the revised ordinance about code enforcement officers reporting directly to the sheriff's office on illegal waste dumpers. An audience member expressed her concern about the safety of the use of the video surveillance equipment, indicating she was afraid not knowing who exactly would be able to use the equipment. She wanted assurance it would only be used for illegal dumpers and not anyone else.

The council moved to delay implementation of the ordinance until March, when n Planning Director Roger Mobley is able to integrate safety and privacy into the final law.

The council did approve an ordinance allowing and regulating sidewalk vending, also following up on state regulations.

The council recognized Sheriff's Deputies Sgt. Augustin Moreno and Juan Maldonado for their work with the Sheriff's Activities League, known as SAL. Deputy Maldonado presented a slide show about the activities SAL kids are involved in.

In a separate report, Deputy Maldonado also advised the council that the KCSO would be running another saturation patrol to make their presence known.