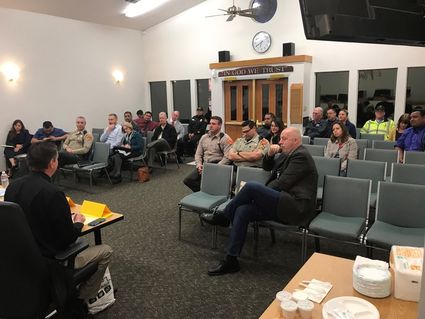 David Couch listens to the questions and comments from attendees.

A number of residents heard from Supervisor David Couch at his first town hall meeting in Wasco – and asked him a few questions of their own.

His purpose for holding the town hall at the City Council chambers was to have the residents of District 4 be more aware of the various county resources and services that are available to them. "I hope through these Town Hall meetings different levels of government and organizations will be more inclined to communicate with each other," Couch said.

The panel members introduced themselves and described the programs they offer to Kern County residents. Jeremy Oliver and Michele Gomez of the county's Aging and Adult Services, Chief Deputy Director of Human Services Cindy Utea, Chief Deputy Larry McCurtain of the Kern County Sheriff's Office and Brynn Corrigan from the Health Department gave a brief overview of their organizations.

Gomez and Oliver described the services offered by their department, such as help with home, assistance, with filling out forms, bilingual help, transportation, home-delivered meals, protective services, income tax preparation, fishing licenses and caregiver services. They advised the attendees that all services provided by the KC Aging and Adult Services Department are free, and assistance is available at several locations in the county.

Seniors also are provided legal services and an Alzheimer's Day Care Resource Center, as well as a long-term care advocate who attempts to resolve complaints made by or about people living in long-term care facilities. The contact numbers are 800-227-7866 or 661-868-1006. Their office is located at 5357 Truxtun Ave. in Bakersfield.

Mayor Pro Tem Tilo Cortez and Pastor Danny Scott of the Free Will Baptist Church asked when the county was going to do something about the homeless situation. Couch responded that prior to the Nov. 6 election, he pledged $20,000 from the District 4 budget to help with the cost of the homeless situation by hiring qualified homeless to clean up litter.

"I'm also beginning a new outreach plan to combat homelessness in District 4," he said. "The Bakersfield Homeless Center will hire qualified homeless from District 4 to clean up litter, weed removal, basic cleanup and other simple beautification tasks in the district."

Couch has hopes that this program will have enough funds to allow the crew to work five days a week in the cleanup effort. Donations toward this program can be made to the Kern County Foundation or to the Bakersfield Homeless Center.

Utea emphasized that the Department of Human Services has an office in Shafter, which is already serving a major portion of Wasco residents. Their department is moving toward making applications for their various programs available online.

In addition to the discussion on the homeless situation in Wasco, Mariana Solobowski asked what programs were available to the elderly.

Following the Department of Human Services' report, Larry McCurtain, from KCSO, highlighted a few projects they are working on. One of them is a Civilian Camera Registry that would allow households to register their cameras in a system that would record a break-in or an act of vandalism. This would enable the KCSO to use the footage during investigations, if the homeowner provides it.

McCurtain also mentioned efforts were being made to improve the way the sheriff's office delivers information to residents. KCSO plans to expand their social media handles and launch a phone app in the near future. 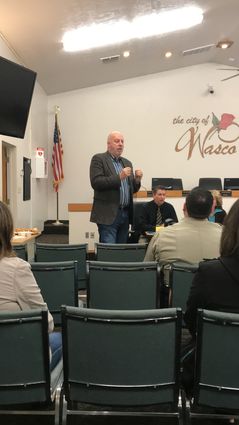 David Couch addressing the residents at the town hall.

Downtown Business Association member Camilo Vasquez asked when the different food programs would be coming to Wasco. Couch said he would look into this question.