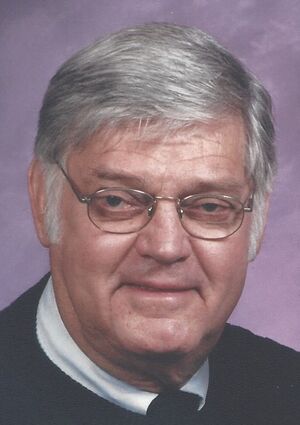 Merrill Eugene Lehman of Bakersfield, California went to be with the Lord on Friday, Dec. 30, 2022, at the age of 87.

Merrill was born in Delano on Aug. 21, 1935, to Ben and Peggy Lehman. He graduated from Delano High School in 1953 and received a bachelor of science degree in agronomy at Fresno State University in 1958.

Merrill married his high school sweetheart, Adele Salazar, and together they had four children.

He worked as an agronomist at the USDA Cotton Research Station in Shafter, Administrator at Kern Crest Manor and had his own Antique Fender Works business, where he made fenders and other body parts for antique cars. He enjoyed restoring antique cars and player pianos for himself and others, and he was always inventing or creating something.

Merrill also built a half-scale riding train that ran on tracks around his five-acre homesite in Shafter, which was enjoyed by many people in the community. He loved spending time with his family at their cabin in the mountains above Bass Lake. He was a member of the Shafter Mennonite Brethren Church, where he sang in the choir for many years and, after moving to Bakersfield, the First Presbyterian Church.

A celebration of his life will be held at the Shafter Mennonite Brethren Church on Saturday, Jan. 14, at 1 p.m. Remembrances may be made to Teen Challenge.