Chief Charlie Fivecoat off to a good start 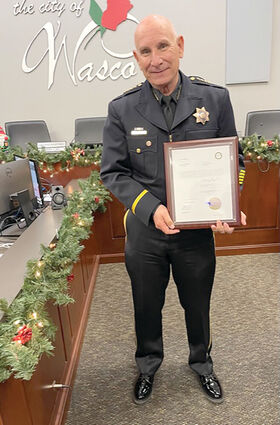 As the citizens of Wasco applaud moving forward with a police department, the leader chosen to bring this to fruition, Charlie Fivecoat, is passionate about empowering the community through a sense of security and trust.

It will be a large undertaking launching the Wasco police department because there are many legal, managerial and political components to managing a police organization.

One of his first tasks will include establishing an agreement with the county for the transition process.

"This process will require the cooperation of the Kern County Sheriff's Office with the City of Wasco to ensure a smooth transition."

He hopes to improve communication with the community.

"Police personnel need to engage our citizens every day and build relationships that foster trust with the people we serve."

Chief Fivecoat said one can only accomplish this trust building if you are freely available and open to talking with all citizens on a regular basis.

"Our officers must have respect for our citizens and earn the trust and respect of our citizens. It is a continuous process without end."

There will be challenges.

"The current state of the criminal justice system in California is broken. Our laws do not adequately protect victims, and too often, the rights of the offender take precedence over our citizens."

In his opinion, the California legislature has decriminalized many of the laws used to protect the public, and the old model of arrest and incarcerate will not work alone.

"The community and the police department have to work together to limit criminal activity in our city," he said. "As the chief, I must find prevention strategies and alternatives to our crime problems."

Fivecoat looks forward to working individually with people to find mutual solutions to the city's crime problems and build public confidence in their police department.

He has many goals he would like to realize and said the start-up of the Police Department is only the first phase.

"I would like to introduce community programs like a 'Citizen Services Unit' to assist patrol personnel and to administer other programs such as the 'Are You OK' program. Re-instituting the Police Activities League is a high priority."

He expressed that he is wholeheartedly grateful that the council voted to hire him for the position because of his qualifications.

"There is a lot of work to be done, and my law enforcement experience and professional reputation will help move the effort forward."

When the department launches, his focus will be on community engagement, as he views it as an absolute necessity and that it must be continuous.

"The police department is only as good as the citizens are willing to support. Public trust and honest communication is the only path to success."

He thinks the department, with the help of the citizens of Wasco, can work to prevent crime and focus on issues directly impacting the local community.

He wants to send a message to criminals that he will be tough on crime.

"The Police Department has a duty to our citizens to protect them from criminal behavior. I would prefer that no one goes to jail. However, be assured if you victimize people, I will use every tool available to hold you accountable and put you in jail."

There will be gang officers on the new force, he said. "But all of our staff will be trained regarding the gang issues affecting our city."

His strategy to fight gang-related criminal activity will be to work in concert with other local, state, and federal agencies to abate our gang issues.

He is looking forward to forming the new force.

"I am honored to represent the citizens of Wasco as their chief of police. The success of our new department will depend on good communication and trust between all of us."