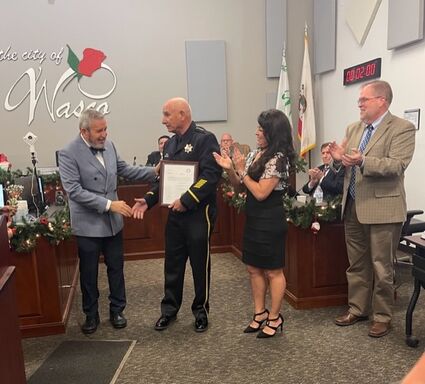 The City Council welcomed the new chief of police, Charlie Fivecoat, and its recently elected councilmembers, city clerk and treasurer at an installation ceremony on Tuesday.

All of them took the oath of office, where they promised to lead the city with integrity and commitment to service.

It was a special occasion where the CDC Honor Guard presented the flag, and Lily Lopez sang the national anthem.

Councilmember Vincent R. Martinez was appointed the new mayor, and councilmember Alex Garica was selected to hold the position of mayor pro tem.

Martinez said, "This is one of the biggest honors of my life to be able to serve the city."

New councilmember Reyna said that the city clerk requires knowledge of many subjects.

"She does a lot for the city, and I appreciate Maria tremendously."

City Manager Scott Hurlbert said of her, "You come through when we need you."

City Treasurer Lamar Rodriguez returns to the role she has held for the last twelve years.

"I wish you the very best," Reyna stated.

Many congratulated all of the leaders chosen to represent the city.

City Manager Scott Hurlbert said of the Chief of Police, "It is a great day for the city. I am excited for Chief Fivecoat to take this new step."

Chief Fivecoat responded, "Thank you for the support for allowing me this opportunity. I firmly believe in my heart that I will work hard to solve our problems. I pledge to give all I have to make that a reality."

Reyna said of Fivecoat, "From the day I met you, I liked you, and that hasn't changed. Thank you for taking on the challenge. I am right behind you."

Councilmember Alex Garcia echoed his sentiment, "Welcome to the family. Without a doubt, everyone I have spoken to all have good feedback. I'm looking forward to having you."

Incoming Mayor Martinez added, "All of the community feels we have the right person. Today starts a long journey, but it is going to be good for the city."

Of Medina, Reyna added that he thanked him for willing to take on the job.

"That speaks highly of you," Reyna said.

Hurlbert shared, "We are happy to have you on board."

In response, Medina expressed that it was an honor to be here.

"I am here to be a public servant. I have been a Wasconian all of my life. I look forward to being with a leadership team that will move Wasco forward."

Reyna said that Saldana ran for councilmember two years ago.

"He lost by one vote. He ran again, and this time he clinched it." 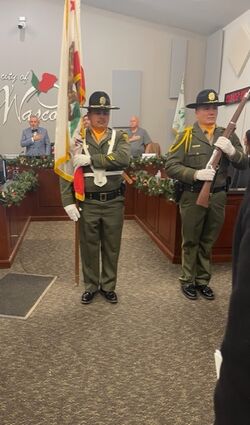 Saldana said, "I am ready to put my heart into serving all of the constituents."

Reyna was thrilled to continue to be a part of the council.

"I am very thankful I was elected again, and I will continue my dedication to the well-being of our city. I am not going to stop being out there for the betterment of Wasco. Thank you all."

At the meeting, it was a packed audience.

Afterward, there was a celebratory reception for the honorees and all the guests that attended.