Clock strikes 12 on Generals as they lose State Championship game, 20-7 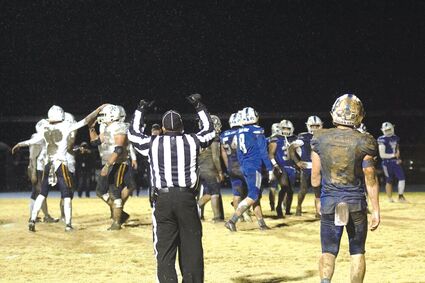 ORLAND -- The clock struck twelve on the Shafter High Generals, ending their playoff run as they lost to Orland High in the State Championship game 20-7 on Saturday night. The game was played on Orland's home field, which was not a playing field as much as a mud bog.

Shafter struck first in the game in the first quarter, with the offense struggling to move the ball on the soggy field. Christopher Espinoza put Shafter up 7-0 with a four-yard touchdown run.

The Trojans answered immediately, with a 62-yard touchdown run by their quarterback, who went over 2,000 yards rushing for the season during the game. The PAT was blocked, keeping the Generals ahead 7-6.

The Generals attempted to add to their lead in the second quarter, but were hampered by a couple of miscues and inability of the receivers to run their routes due to the slippery conditions. Shafter's pass offense contains a great number of timing patterns, which the Generals just could not sync up on with the uneven footing and wet, muddy football. The Trojans got a score right before the half, giving them a 12-7 lead going into the lockeroom.

In the second half, the Shafter defense kept the Generals in the game by stopping Orland's powerful running attack. The Trojans only threw for 200 yards the entire season, relying on a split wing running attack that is hard to defend in normal conditions, not to mention the conditions they faced on Saturday night.

The rest of the game, the Generals tried to mount a drive but were unable to get anything going on offense. The defense stopped the Trojans on their every attempt for additional points, but the Shafter offense just couldn't get more points on the board.

After the game, Coach Jerald Pierucci let his feelings known about the decision to have the game played in the toough conditions. " I am so proud of my guys for everything that they fought through. They played their hearts out, and I think that it is sad it had to end like this. I think that it is bullcrap that a State Championship game would be decided on a muddy mess like this. With the Division I and II title game being played on a neutral field on turf, this is just inexcusable. Shame on you guys!" 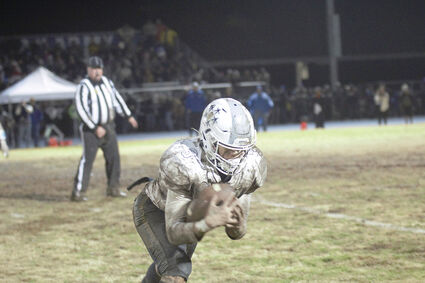 The loss doesn't detract from the amazing season that the Generals had, mounting such an outstanding playoff run, full of come-from-behind victories and performances that gave the community of Shafter joy. "I am so proud of these guys for everything that they have accomplished this season. It was such a joy to watch them on this journey. And with the team being so young, the future looks really bright for Shafter," said Mayor Pro-Tem Chad Givens, who had made the trek north. In fact, the visitors' side of the stadium was packed, filled with Shafter faithful. There were 1,600 tickets for sale for the game, and by Wednesday, there had been over 500 tickets sold to the Shafter side of the stadium.

This was the first state title game in Shafter's history, as well as the first Regional Championship. It was also the first Valley Championship since 1955. With the youth of this team, having only four starting seniors, a freshman quarterback, sophomore running backs and receivers, the Generals surprised many with their success.