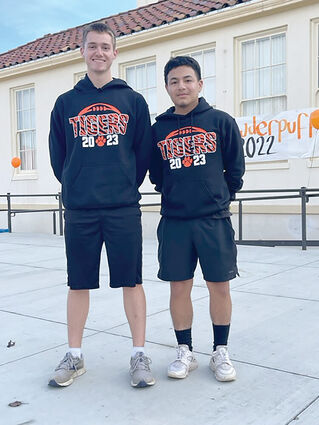 Activities coordinator Hailey Coyle said it was a great turnout.

"Both classes had a lot of fun. Overall, it was a success."

The game is a long-standing tradition for WHS.

"It's been happening ever since I can remember," Coyle said.

The senior girl football players came out on top with a final score of 20 to zero. The girls played with heart and demonstrated a thorough understanding of the sport.

Before the game, there was a rally for the students to get pumped up ahead of the showdown. There were chants, games and dance performances from the junior and senior boy cheerleaders.

Both cheer teams also performed during halftime, wowing the audience with their elaborate choreographed numbers taught by girls from the varsity cheer team.

"They worked hard to accomplish either learning the rules and how to play football and for the boys learning how to cheer," Coyle said.

She continued, "The girls did really well. They don't have a background in playing football, and they only practiced for a week. The coaches did a great job preparing them."

Cheerleader Kaleb Lowe said, "I thought it would be a fun experience for my last year and a way to get together with many of the other seniors."

He added about having the girls from the cheerleading squad train the boys, "We put in a lot of practice. It was hard to learn the routines, but we had the best coaches."

Cheerleader Henry Vasquez said, "My favorite part was that it brought out the adrenaline and showed our school spirit. We hope everyone enjoyed the stunts. Our goal was to put on a good show."

To participate on the girls football team, no prior experience was needed. There were girls from all different backgrounds and athletic skills.

For the junior class, almost 50 girls played on the team, and about 70 for the senior team.

During halftime, a Powder Puff prince and king were also crowned.

Aguerria said, "I didn't expect to win. It's pretty cool."

It was interesting to watch. 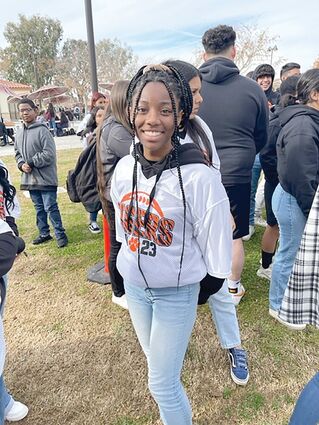 Brianey Guerrero said, "I wanted to support the boys as cheerleaders and the girls as football players and see the gender roles switched."

Special bonds were made.

Junior football player Addison Vasquez said, "Playing in Powder Puff allowed me to meet girls in my grade who I have never met. It is truly a great experience as well as a memorable moment."

The game was a way to get students out of their comfort zone.

Coyle said, "It gets a lot of kids on campus that might not have been involved. The younger classes are looking forward to it. I'm excited to see them be able to take part in it next year."