Event ushers in the holiday season 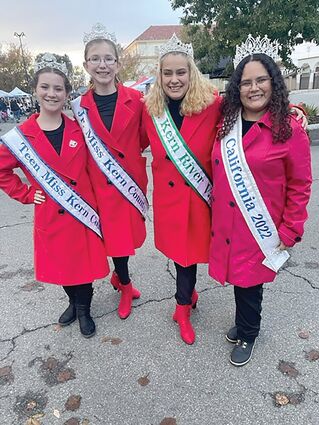 Ms. Kern County Pageant queens said they were excited to be a part of the festivities.

The Wasco holiday festivities last Saturday were a gathering of community, with a vendor fair, Christmas parade and tree lighting ceremony.

The Orange Heart Foundation and the Rose Festival Group organized all of the activities. Much effort was involved on their part to make it a success.

The planning began right after the Rose Festival.

"We look forward to this all year long. We love it, and it's just so special, from the vendors to the parade to the Christmas tree lighting in front of our beautiful historic Wasco High School auditorium," Rose Festival Group member Sharon Sharp said.

"When you get here, it's magical. Doing it at night also adds a meaningful component. It's another example of Wasco coming together."

The evening kicked off with a vendor fair.

"There were 26 vendors with a mixture of food including tacos, funnel cakes, donuts and Korean BBQ," Sharp said.

Sonya Moreno said, "How can you say no to any of this delicious food?"

"It's very nice. I like that they do this for Wasco," Felix said.

Samuel Fowler shared that the best part was the food.

"I had the donuts and loaded fries. They were both amazing."

Abigail Figueroa came to the vendor fair with her husband, Eduardo.

"I think it's fantastic. They didn't have this back when I was in the parade in the early 2000's," Figueroa said. "I was really excited that they brought in Korean barbecue."

Omar Palomares said of the vendor fair, "I think it's a good thing as a community to get together and socialize a bit more."

The Christmas parade started at 7th and Broadway streets and traveled up 7th Street to Poplar Avenue. There were 40 entries, almost 700 participants and about 75 independent vehicles.

The floats were decorated in a Christmas holiday theme with bright lights.

There were 11 queens from the Ms. Kern County Pageant.

"This is my second year in the parade," said queen Sonya Moreno. "A highlight for me was seeing all of the children with their smiles and excitement in their eyes. Thank you to the City of Wasco for having us."

"We love it. Me and my wife and kids enjoy it."

Logan Gross came to the parade to look at the cars and spend time with his school.

"I've been in the parade lots of times. In the past, I was with the Wasco Tai Kwon Do float."

Luvia Lopez, with the WHS color guard, said, "I thought it would be a fun experience for my senior year. I was excited about it all month."

"This is my first year in color guard, and I wanted to show off everything I've learned this year."

Rosie Silva, a parent with the Wasco softball team, the Chain Breakers, said she wanted the girls to enjoy the holiday.

"We decided to be a part of the parade to support our community," Silva said.

"Our kids had a blast. I like the small community and how many people turned out."

Sarahi Maldonado was in the parade with the WHS cheerleaders.

"It was great just looking at the little kids waving and smiling at us and seeing all the floats with colorful lights and decorations."

Ava Melendrez, another WHS cheerleader, said, "It showed that Wasco has a lot of spirit."

At the Christmas tree lighting ceremony, Santa made a joyful appearance to delight the young and old.

Mayor Reyna shared, "I think it's wonderful to see so many people gathering for these events. The parade and tree lighting ceremony are traditions that bring us together and unifies us as a community even in difficult times."

Of the Christmas tree lighting, Steven Sanchez said it was breathtaking.

"It was an inspiring event."

Yesenia Lizarraga said for her; it was the best part.

City Manager Scott Hurlbert complemented the organizing committee. "Congratulations to the Rose Festival Group, Orange Heart Foundation and all of the volunteers that make events like this happen," he said.

This year Santa Claus was played by Councilmember Mike Lynch. 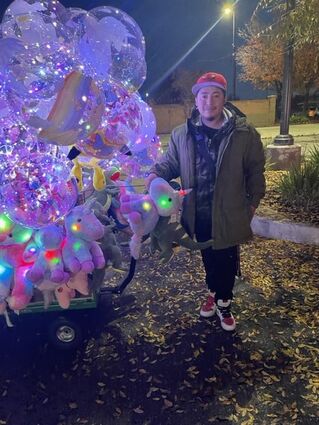 "It was my first time doing this, and they have asked me to continue doing it yearly," said Lynch. "I liked taking pictures with the kids."

After the parade and Christmas tree lighting, the entertainment continued with a block party where, once again, guests could take part in everything the vendor fair had to offer.

The organizing committee said they were thankful for their partners, including WHS, the City of Wasco, the Rotary Club, Kern County Labor Contracting and the volunteers that made the celebration possible.

"We all are involved in events in the community with subgroups, and those are all awesome. But an event like this impacts the entire community, and there's just something marvelous about that," Sharp said.

"Our goal is to grow it every year and make it an event you don't want to miss."