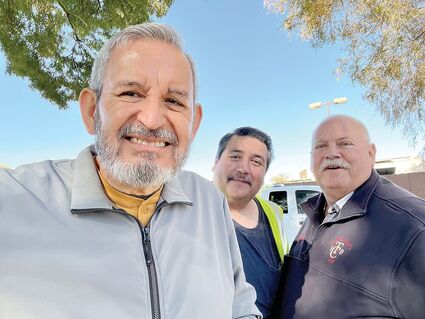 "We have put on this event going on over ten years now. It's a great way to interact with the community and provide a needed service. It helps with keeping our city beautiful and keeping illegal dumping down," Sergio Gonzalez of Code Compliance said,

Gonzalez believes it creates an avenue for the citizens to throw away large items they wouldn't be able to under normal circumstances.

"It saves them a trip to the dump. Certain items have a fee, so they can avoid that fee by dumping through us," Gonzalez said.

"We also have equipment that can be borrowed to have their own neighborhood clean-ups like gloves, vests, garbage bags and trash pickers."

Garcia said, "I'm here today because it is one of my favorite annual events. We do this twice a year, and it is always a great turnout. It brings the community together under one goal, which is to keep this community clean. It instills a sense of civic duty."

Lynch stated, "Being a small community, it is important to keep it as beautiful as we can. Nobody likes to see trash and old furniture lining our alleys. It is unsightly, and having an event like this allows people to bring it directly here."

For those who had no way to transport the waste, the city coordinated a service to go to their address and pick it up.

"Citizens can put it out on the curbside, and we can retrieve it from them," Sanitation Superintendent Scott Maxey said.

Cesar Montes with the City of Wasco, who helped with the curbside service, said, "We picked up a lot of old refrigerators, TVs, and mattresses. People did not have trucks, so they were very grateful. We were busy all morning."

Tommy Hunley with Alianza, an e-waste recycling company, was there collecting old electronics.

"Anything with a power cord, we get it and ship it out to all around the world. Most people don't know how to recycle it, and it ends up cluttering the earth," Hunley said.

Millions of phones that are incorrectly discarded end up in the ocean.

Hunley added, "It's a way to help the environment. This event saves money and gas from having to drive out to us in Bakersfield."

Vicki Arriaga brought a laptop, printers, a computer monitor and a sewing machine.

"These are things you can't just throw away. I'm just thankful they held this now. I made it a point to come."

Armando Macias disposed of old furniture and other items he didn't need that took up much-needed space in his home.

"It's helpful because if you don't have a vehicle, you can get rid of big bulky items for free," Macias said.

"This is a big economic help because I don't have to waste gas driving to Bakersfield."

Al Morris said of the rusty fencing he dropped off, "This keeps my yard clean and house organized."

Volunteers played a big role in the clean-up. 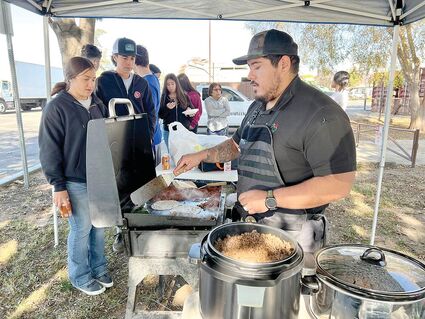 Christian Tovar of Code Compliance prepared tacos for the volunteers as a treat for their work.

"Events like this are important because it gives a chance to our volunteers to learn the significant difference they can make in their community through volunteering," said Mayor Gilberto Reyna.

Edith Vidales commented on being a volunteer. She said, "It is especially important to keep these alleys clean because a lot of students use them to and from school. It makes it easier walking through without fire hazards or any danger of tripping and falling."

"I want to thank the city staff and our partners for putting this event together and for giving up their time on a Saturday morning to make this happen," Reyna said.