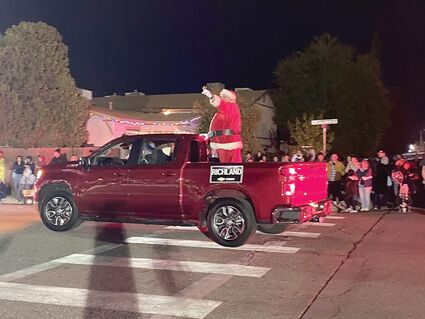 Santa waving to the crowd.

The Shafter Lions Club, together with sponsor The Wonderful Company, held their annual Shafter Christmas Parade on Friday night, with entries coming down Central Avenue from Mannel Park.

Hosted by Angel Jimenez, who does the sound for the majority of special events in Shafter, welcomed the large crowd lining the streets, awaiting the entries of floats, cars, trucks and bands.

The Shafter High School Band was on hand, playing seasonal favorites, as well as putting on a demonstration by the Shafter High Drill and Flag Corps.

The American Refuse entry was one of the highlights of the parade, with a trash collection truck decorated with Christmas lights, with a snow machine on the top of it blowing snow as it made its way down Central Avenue.

Several clubs and organizations in Shafter were represented, with the Shafter Recreation Department, Shafter Police Department and Shafter's FCC soccer teams, along with the Shafter Commanders, the city's youth football team in the Golden Empire Football League.

The event started in the afternoon., with a variety of things at the park for the entire family to do. There were bounce houses, food, music and a raffle in preparation for the nighttime spectacle. 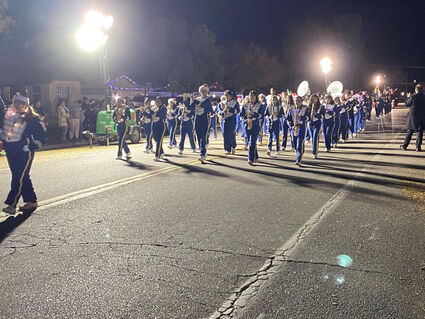 Also on hand was the Richland Trojan Marching Band and Flag Team. Of course, no Christmas Parade would be complete without the appearance of the Jolly Old Fellow from the North Pole. Santa rode in the parade with Mrs. Claus, and continued the festivities after the parade, posing for pictures with the young, and the young at heart.

The event had many volunteers who made the parade and festivities a success, including several clubs and churches in town. STG Basketball, the champion basketball program in Shafter, was on hand to keep attendees warm, serving hot chocolate and churritos.

"This is such an awesome event, with the lights, music, and fun things for the kids to do," said Angela Munoz, who was there with her three children. "It's a lot of fun to take the kids to something fun and safe during the holidays."