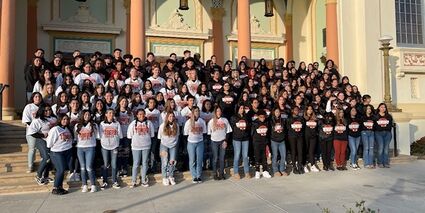 A group shot of the 2021 powder puff players and cheerleaders.

Wasco High School will host their annual powder puff fundraiser on Thursday, December 8, at 7 pm. It promises to be a spirited celebration full of excitement and friendly rivalry.

"The event has been going on for as long as I can remember. I played back in 2002. I know my mom played back in the 80's. It's a fun tradition that has been around for many years," class of 2023 advisor Amanda Rodriguez said.

The tradition of powder puff games was created in the 1940's as women began filling in to play football games while men were gone fighting World War II. Generations later, it became a high school tradition and, over time, became what we know it as today.

The game of flag football will consist of junior and senior girls going head-to-head against each other. Approximately 80 girls for each class participate.

"It's just like a regular football came but without the tackling," Rodriguez said.

A unique component is that there will be almost 30 junior and senior boys cheerleading for the players. They will perform their show-stopping dance routine at the rally before the game.

Rodriguez said the cheerleaders love coming out and having the best time.

There will be three senior football players coaching the girls, and there will also be professional referees.

An MVP for each team will be announced, and a powder puff prince and powder puff king will be crowned.

Rodriguez said it is a rivalry and both teams always want to win, but it is always a friendly game.

"All of the girl players and boy cheerleaders really get into the spirit to make the night special for all spectators," Rodriguez said.

Any junior or senior girl can play.

"You don't have to have a certain GPA or experience playing a sport," Rodriguez said.

She added that they get all kinds of girls involved in the game.

"We get girls from all walks of life wanting to play. They want to be a part of something big. Those in their senior year get to go out with a bang."

Rodriguez said it's great to see these girls as amazing athletes in different settings.

The players get a jersey and something they get to have forever.

It is a fundraiser, and tickets for adults and children are only $3. There will also be a stacked concession stand with all the crowd favorites. 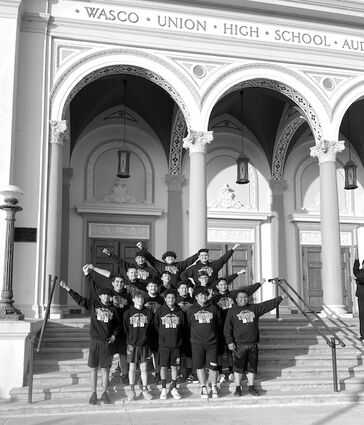 The junior and senior boys cheerleaders for the 2021 game showed their school spirit.

The money raised will be split between the juniors and seniors, with the senior funds to be used to support their class trip to the Six Flags amusement park for graduation night. The juniors will save their portion of the funds for their senior year.

With the money left over, the teams try to do what's been done in the past and leave a class present.

"In 2011, they gifted a tiger statue, and the class of 2017 donated colorful tiger-themed flags on the light poles you can see in the parking lot," Rodriguez said. "We want to leave something behind so the school can remember us by."

Rodriguez said the game shows not only school spirit but town spirit as well, with the community coming to participate in the festivities.

"Everyone is invited to come out to see these incredible girls showcase their athletic talent while supporting the juniors and seniors so they can go on their senior class trip."