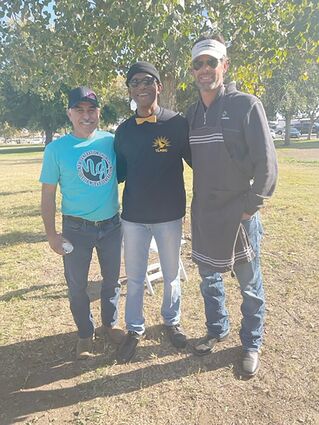 "Our intention was to try our best to make Wasco a nice place to live. It has always been that way, and we want to keep it that way, " Pastor Carlos Harrison of True Light Baptist Church said.

He said it was more than just a meal. "We also wanted to nourish spiritually."

"With bringing the three churches together, it was special because it was done all in one accord. The goal was to show there is only one church in the eyes of God."

Marcus Ballard from New Generation Church is an assistant pastor who was a key event organizer.

"We wanted to partner to show the unity among the churches in Wasco. It was to unify for a greater cause to serve the community," he explained. "The purpose of the Thanksgiving lunch was to give glory to God by providing a hot meal to people who might not have one over the holiday season."

"In the aftermath of all of the negative news in Wasco, we wanted to be a part of bringing positivity to the city and a message of hope."

Elder Brent Paul from Grace Community Church said the best part for him was having all three churches together and serving.

"It was a highlight for me," he said, "Marcus Ballard does a good job organizing. It went smoothly, and every one of our churches has the same desire to serve the community. It is what we are called to do. Growing up in Wasco, I feel it's part of our duty. It makes me feel great helping the community that I grew up in."

"The rest of the food that was left over we gave to other organizations to distribute among the needy," Ballard said.

"There was also pumpkin pie and peach cobbler. I feel grateful that they made the effort out of their hearts to provide this for us," Lucy Trujillo said. "We got to take some home to enjoy later."

"What I liked most was praising the Lord because he deserves all of the glory and honor. I came with my two daughters. The food was really good."

There were about 100 volunteers that helped to make the event a success.

Carlos Figueroa believes that the Bible says to be of service and do as much as you can to help your community.

"The church teaches us to love our neighbors and even our enemies. It's simply about love."

Javier Madrigal said he was a volunteer for Christ.

"God wants us to help the citizens of Wasco because it is something that he has put in our hearts."

"As a Christian, this event is a vehicle of communication to touch the souls of others for Christ."

Another volunteer, Gina Zuazo, shared, "I do this for obedience to God. It is important for me to give of my time because I want others to know the evangelical of salvation through me."

Shontelle Crawford also volunteered. "I like helping people in need. There are others that are less fortunate than myself. If we all go back to the teachings of Christ, we would be much better off as a society."

She continued, "We need to learn to love each other and put all of our differences aside. Christ was about all people regardless of race, creed, color or national origin."

Some said the best part about the event was having the pastors together. Their preaching was in Spanish and English.

Florencio Rodriguez expressed that he volunteered to help the church so that Christ could touch one's heart and bring more souls to him.

"I want others to get to know the testimony of God and understand that he changes our lives from addiction like alcohol or drugs. He has the power to save."

"I love this and hope we will continue to do this for the community and bring people together."

She said that with all of the recent violence in Wasco, it is time to stand up as a community. 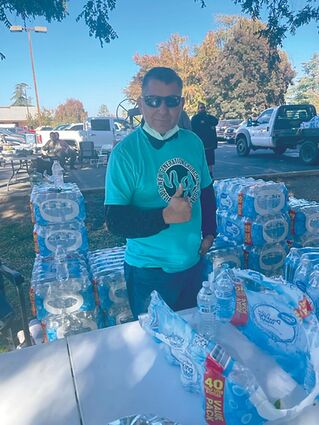 Javier Madrigal volunteered because he wanted to serve Christ.

"We need to unite instead of separate. We are so divided now, and I think we need to combine as one. That is what God wants for us."

There was a prayer tent at the event, too.

"They prayed for my family and my sick son. I felt really happy about that," Antonio Ramirez said.

Leaders from all three churches hope that the tradition of the Thanksgiving meal event continues to live on.

"We are looking forward to next year to make it even bigger and better," said Pastor Harrison. "It's about unity in the community of Wasco; a better me makes a better we."