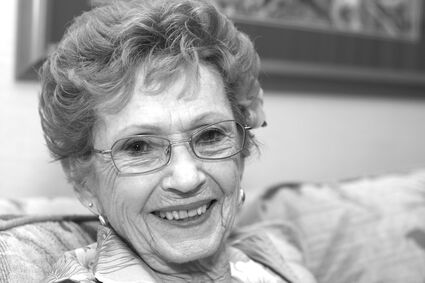 Wanda Perryman was born in rural Arkansas in 1927 to parents Omer and Lola Eppler. Her early life was spent living on the family farm with her parents and brother, Arnold. She had many fond memories of riding to town in their horse-drawn wagon.

When the depression hit, she and her family moved to Southern California, settling in the city of Brawley. While there, she attended local schools and eventually went to work for the telephone company as a telephone operator. The family later moved north to the city of Delano, where Wanda met her future husband, Klon.

After a whirlwind romance, she and Klon were married in Las Vegas on June 24, 1950, settling in Wasco. October 1951 saw the birth of their first son, Stephen, and in May 1955 their second son, Greg, arrived.

Life in Wasco was centered around family, with her parents still residing in nearby Delano and Klon's parents (Ralph and Myrtle), along with his brother's family (Hugh & Betty) and his sister's family (Bonnie and Elwood), along with many cousins, aunts and uncles, all living in Wasco. Family gatherings were the norm. Close friendships, some as close as family (Gene and Beulah Miller and Bill and Earlynne Woolly) also developed that have lasted lifetimes.

When their sons grew older, Wanda began working at Janzen's Drug Store, where she remained for many years until health issues forced her into an early retirement. She always cherished her time with the Janzen family and the many other co-workers there. After her retirement, Wanda took up painting as a hobby and ultimately became quite the artist, painting pictures still prized by family.

Wanda and Klon celebrated their 50th wedding anniversary in 2000 with friends and family, and were married for 52 years until Klon's passing in November 2002. Wanda continued living an active lifestyle with her many bridge-playing buddies, and also began traveling. Cruising to Alaska, Hawaii and along the California coastline to Mexico were among the many vacations she enjoyed.

Wanda is predeceased by her parents, Omer and Lola; her brother, Arnold, and husband, Klon. She is survived by sons Stephen (Candy) and Greg, and grandchildren Michelle (Andre), Jeff (Anna), Ryan, and Lloyd. She also had several great-grandchildren and great-great grandchildren.

Interment will be after graveside services on Monday, Nov. 14, 2022, at the Wasco Cemetery.