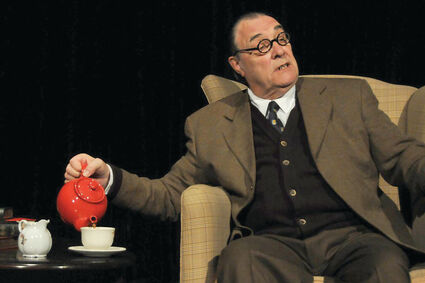 David Payne has been portraying C.S. Lewis for over 20 years

Payne has been portraying the acclaimed author for over 20 years. He started playing Lewis after answering a casting call over two decades ago. Over 20 years and over 1,000 performances later, Payne is still wowing audiences with his accurate portrayal.

Payne has performed in Shafter twice previously during the Colours Festivals. The first performance was "An Evening with C.S. Lewis," which depicted his special relationship with fellow author J. R. R. Tolkien, who wrote the Ring trilogy.

"Christmas with C.S. Lewis" also deals with this relationship.

Lewis was originally an atheist when he first came on the literary scene. But, after an encounter with Tolkien, who believed that the Jesus "myth" was real, Lewis's view changed. This encounter started Lewis' journey from atheism to Christianity. After his conversion, Lewis' vision of Christmas was never the same.

In the show, Lewis is found at home near Oxford on Christmas Eve hosting a group of Americans who are in England for Christmas. They are about to experience and unforgettable assortment of Yuletide recollections, stimulating a range of emotions. Above all, they will discover how that encounter with Tolkien forever changed his Christmas celebrations.

Starrh said that David Payne has been portraying Lewis for years and has been critically acclaimed for his performances.

Born in Britain, Payne moved to the United States in the 1990s, Payne's desire to act on stage followed his days in event promotion and artist management