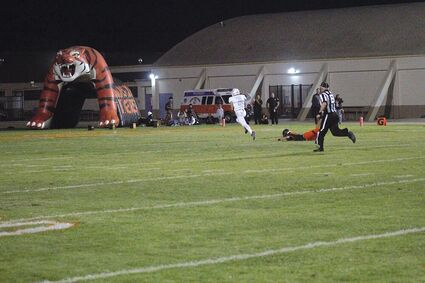 For the first time in the 90 year history of the Shafter/Wasco rivalry game, the standing-room-only contest in Wasco went into overtime Friday night. The Wasco Tigers scored on their first series of the overtime session, winning the game 41-35.

The game was a battle that epitomizes what this rivalry is all about. The Tigers sped out to a good lead, followed by a surge by the Generals, who made it difficult on themselves in the first half, not being able to stop the powerful running game of the Tigers.

Wasco scored first after a long and grinding drive that took up minutes off the clock and chunks of yardage. The duo of Izaiah Juarez and Michael Dominguez churned out yards on the ground, blasting through the holes made by the offensive line.

Trialing 7-0, Shafter answered on their next series, the Generals used some trickery, scoring on a pass play that saw Joel Gutierrez get his first touchdown of the year, tying the score at 7-7.

For the rest of the first half, the Tigers were unstoppable on offense. The Generals' defense didn't stop the Tigers on any of their drives in the first half. The Generals' offense worked hard to match the Tigers in the scoring department to stay in the game. Quarterback Ezekiel Osborne hit Koa Rhodes for a touchdown pass to cut Wasco's lead late in the first half to 21-14. But, with enough time left on the clock, the Tigers' offense, led by David Manzo marched down the field with a series of efficient runs to widen the lead to 14 points again just before the half, 28-14.

In the second half, the Generals' defense got their first stop of the Tigers, giving the Generals the ball in good field position. Shafter took advantage of the opportunity and scored on a long touchdown run by Jesus Figueroa, cutting the lead to 28-21. 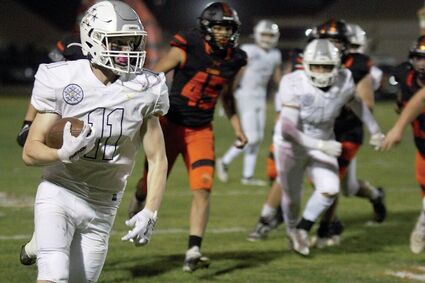 Koa Rhodes on his way to a 52-yard touchdown.

But, the lead was widened again with just under seven minutes to go in the third quarter when Juarez scored from 12 yards out, giving the Tigers a 35-21 lead. At the beginning of the fourth quarter, the Shafter defense made a big stop, denying the Tigers on a fourth and goal from the Shafter 4 yard line. The Generals didn't waste time grabbing a chunk of the lead back when Rhodes scored on a 52 yard touchdown run, cutting the lead to seven points again, 35-28.

With seven minutes to go in the game, Shafter tied the score at 35 when Osborne connected with Mariyon Sloan on a 56 yard touchdown pass, forcing an overtime.

Shafter failed to score on its first series of overtime. On Wasco's first series, they punched the ball into the endzone from two yards out, winning the game.