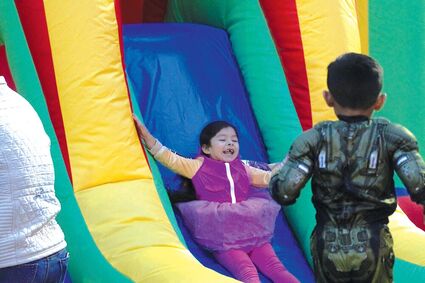 Veronica Gonzales smiles as she slides down the slide.

The Shafter Kiwanis Club hosted their annual Halloween Parade and Carnival at Mannel Park on Monday night, drawing over 500 people to the festivities. The parade included the Richland Junior High Trojan Marching Band, along with entries from several different age groups, from kindergarten to the sixth grade, with cash prizes given to the winners.

The parade featured monsters and cartoon characters, as well as some superheroes.

After the parade, residents were at Mannel Park, which had a variety of things for the kids to do.

There were the inflatables, such as bounce houses and slides, as well as a lot of games for the children to play, winning candy and prizes. 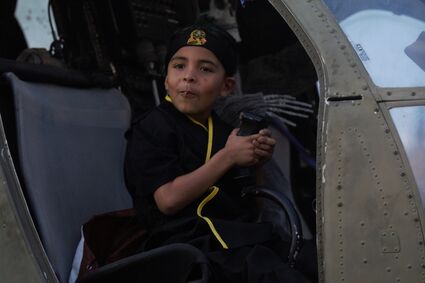 Ethan Mendoza sits in the cockpit of the Minter Field Air Museum helicopter.

Several churches and organizations had booths at the event, including Shafter Missionary Baptist Church, who had fun games for the kids. There were also several food booths set up, serving up ot dogs, tacos, funnel cakes and baked goods.

The festivities were enjoyed by young and old alike, with a safe and fun place to celebrate the holiday.

Included in those attendees was Ethan Mendoza, who was getting his picture taken sitting in the cockpit of a LOACH helicopter, which was at the event thanks to the Minter Field Air Museum. Museum President Ronald Pierce said, "It is a lot fun to see the kids' faces light up when they sit in the cockpit of a real helicopter.

Veronica Gonzales, who was there with her mother, had a blast sliding on the inflatables. According to organizers, they were happy to hold the event, giving families a place to celebrate that was a lot of fun, as well as safe for their children.