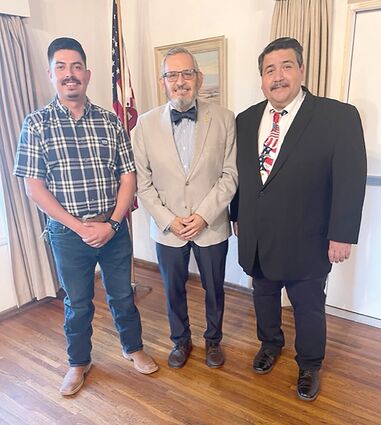 "I think that holding candidate forums is one of the most important things we do," Club President Jill Drescher. "We are a nonpartisan organization, but believe that people should be making informed decisions."

She thanked the candidates for being willing to sacrifice their time for community service.

At the forum, the candidates provided an introductory statement, and then it was open to questions from the public.

Three issues discussed at the forum stood out: public safety, the future of a Wasco police department and the water situation.

Pallares has lived in the area his whole life. He has an associate of science degree from Bakersfield College and works at Grimmway Farms as a designer.

Medina graduated from the University of California at Davis and is employed by Wonderful Orchards as spray and field operations director.

Medina said he is running to give back to the community. He said he is starting his family in Wasco and wants to make sure it is a safe city to do that.

"I decided to participate in the forum because I thought it was a good opportunity to talk about some pertaining issues currently happening in Wasco."

He said of the criminal activity in Wasco, "This is something we are seeing across the state. It goes further than the City of Wasco, where it's a slap on the wrist for criminals."

He wants to see crime decline with more policing.

"We need to find a way to pay for a police department."

Pallares said about criminal activity and the possibility of a police department in Wasco, "The city manager is working on it. The short answer is we're looking into it."

He added, "It's unfortunate some of these events are happening. We got to focus on your family, your children and your parental rights to seek for their safety."

Pallares continued, "As individuals, if we see something ourselves, we need to say something and call it in."

He thinks the worst thing we could do is not document anything that happens.

"Documentation will help enormously to make sure your councilman is working on the problem, our sheriffs are working on it and don't let anyone slip through. Report it and give us something to work with."

Of the water situation and whether or not there will be enough for everyone in the years to come, Pallares said it's going in the right direction.

"The city recently obtained property for new wells to get a water infrastructure that will supply the city."

On this issue, Medina commented, "Water is the biggest thing we hope and pray for. We need to make sure we have to ability to replenish water for future generations."

Mayor Gilberto Reyna, who is running unopposed in District 1, was present. He shared a press release on behalf of the city, speaking about the recent shootings in Wasco.

He said the safety of the Wasco community is a top priority for him and the council.

"The sheriff's department is working diligently on this," he said. "All law enforcement agencies in our area are fully cooperating."

For District 4, Councilmember Mike Lynch did not attend. However, he provided a statement. He is running against Eduardo Saldana and Myron Williams.

Lynch said he is representing not only District 4, but all districts. He believes serving as a council member should never be a popularity contest, but it should be a matter of who is better.

"I am qualified to do the work."

The next forum for the elementary and high school board of trustees candidates will take place on Oct. 20 at 6 p.m. at the Wasco Woman's Club, 1601 7th Street. For more information, call Jill Drescher at 661-868-9953.

The forum was transmitted live on the internet, and those wishing to access the video can go to http://www.youtube.com/watch?v=vOtSKoH3h1s.